Did you notice a theme in The Blob this last week? Computers - Unions - Tires - Irish - Elastin.
What's that spell?
CUTIE!
Wrong! the real connexion those 5 tales is a loose association with Clan Osborne.

When bought the farrrrm-let in 1996 the nearest pub in the County was about 6km away opposite the church where all the Shannon's of the Bomb are buried. It was called Osborne's and had been a home-from-home for the last of the Shannons, a bachelor farmer who had died in 1994 aged 70. The goss was that Old Ray had won a television in a raffle and donated the instrument to Osborne's because a) there was better reception from the Mt Leinster mast b) he was more likely to be in Osborne's than his own kitchen c) who wants to watch RTE on their own? I went down into Miss Osborne's bar once, to buy some milk. It was cool and dark but she had no fridge and advised me to get the milk into my fridge asap because it was July and the milk had been under her counter a couple of days already. Then she got sick, and closed the bar and was in a nursing home and finally she died, much lamented because she was kind. 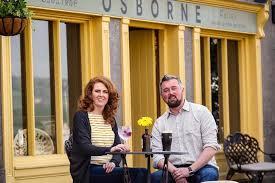 Several years later, Osborne's came to a new life under Eric [L,R], Miss Osborne's nephew and Catherine [L,L]. They gave the front a lick of paint and cleaned the inside up while retaining most of the original features. The dark bar became a cosy place to have a drink. We've all been in Oirish Pubs, whether in Manhattan or Manila, which are tricked out with stuff that rings about as false as the python I met in an Irish bar in suburban Madrid. New Osborne's is authentico and I like it a lot. In the Before Times we'd try to catch a snifter there before crossing the village street for a sub-titled film.

I hope that they weather the Coronarama because they have a lot to offer the community and visitors.