Trades Unions were an important force for achieving whatever amount of social justice which we now include in our list of "attributes of a civilized society". Capitalism, red in tooth and claw, allows workers to choose among employers to obtain the best pay and conditions. Indeed it allows workers to withhold their labour and not work for anyone at all. The market will decide how much an hour of your time is worth. It sounds well in theory but the case is altered in actuality. If the valley has but one coal-mine; the town one cotton mill; the village a single shop; then it is Hobson's Choice for a youngster seeking employment. No job, no money; no money, no bicycle; no bike, no real commute options Mr Tebbit. Trades Unions were an antidote to the gross imbalance of power in transactions between capital and labour. If workers got together, their collective actions could negotiate better pay and conditions for them all. The elephant in the negotiation room was a strike, or the threat of strike. No labour, noproduct; no product, no profit.

In the late 19thC, The Man discovered the political will to allow Trades Unions. If withholding labour was illegal, then the labourers were slaves. The consensus among the Christian middle classes on Victorian England was that Slavery was A Bad Thing. The political history of the 19thC is anchored on stepwise extensions of the franchise. And with each extension more workers got to vote for the people who made the laws in Westminster. And it ceased to be satisfactory to have a poor choice between Liberal [slightly left a bit like Democrats in USA today] and Conservative [rightist, conservative, like US Republicans] candidates. Through collective action, mediated by Trades Unions, the working class was able to scrabble together the finances to run candidates for a new Labour party. In the 1900 General Election the Labour Representation Committee (LRC) got Keir Hardie elected to parliament in Merthyr Tydfil and Richard Bell in Derby. 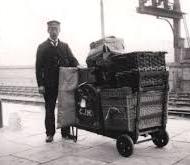 The following year saw a disastrous set back for trade unionism. Workers for the Taff Vale Railway came out on strike. The Company sued their Union for damages to profits and the courts allowed the company to sequester £23,000 from the war chest of the Amalgamated Society of Railway Servants ASRS. Up until that ruling, TUs had been thought of an "unincorporated entities" or Trusts and so not actionable. Part of the thinking was that the Union looked after the widows and orphans of their members and their funds should be preserved to succour the innocent victims of fatal workplace accidents. The Trades Disputes Act of 1906 a) legalised the right to strike b) prevented actions being taken against the unions if they called a strike. Taff Vale created a sense of righteous indignation which gave a big political boost to the fledgling Labour Party which returned 29 MPs in 1906, and 40 in 1910.

Which brings us to Osborne and his judgment. Walter Osborne was secretary for the Walthamstow branch of the ASRS and head porter at Clapham. He was, among other tasks. responsible for gathering subs for the union; but he was also a big supporter of the Liberal Party. The TUC and the LRC was squeezing the liberal middle and pragmatically requiring all MPs elected with LRC sponsorship to take the Labour whip. Osborne, in a secure job and established in his community, found socialism <frisson> dangerously subversive and personally repugnant. Accordingly he took the ASRS to court to prevent them from supporting Team Red as a matter of policy. The Courts found for Osborne: "There is nothing in the Trade Union Acts from which it can reasonably be inferred that trade unions as defined by Parliament were meant to have the power of collecting and administering funds for political purposes." which required further legislation to a) allow refusnik union members to avoid paying the Labour Party pledge; although the default might be opt-in and b) starting to pay MPs a £400 /year salary to ensure that they were not financially dependent on the LRC and its constituent unions. Contrast that with wages for workers at that time: agr. labourers £35/yr; coal miners £70/yr; typesetters £75/yr.

Taff Vale and Osborne were set-backs (meted out by old white men who'd never had to work [as it break your finger-nails work] for a living) to the rise and rise of the rights of the working class. Nevertheless, these judgments rowed against the tide of history because the law was changed in parliament by the Liberal party alone or in cahoots with Redmondites and/or Labour. The Liberal government  - that party secured a landslide in 1906 - put forward a raft of social justice reforms: free school meals; old age pensions; national health and unemployment insurance; labour exchanges. Osborne was key to clarifying what everyone wanted and what they could expect in the arena of labour relations.