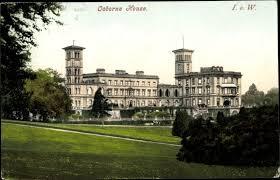 Osborne House [Edwardian Postcard R] is a big old mock-Italian mansion on the North coast of the Isle of Wight. It was designed by Prince Albert Saxe-Coburg & Gotha who was married to the British Queen Victoria with whom he had eight children. They spent a lot of time on holiday down there as far from the affairs of state as a head of state can be without leaving the country . . . unless you count Balmoral, another royal rural retreat in Scotland. Victoria loved living there and indeed died there, but her children had less grá for the place and her son-and-heir donated the estate to the nation as one of his first acts after coronation. It did [WWI] become a sanitorium and convalescent home for officers, but in the first instance it became a school.

In the 00s of the last century, someone had the cunning plan to use the stable-block and grounds as a prep school for those who aspired, like my father, to enroll in Britannia Royal Naval College in Dartmouth at the age of 14. The education didn't come cheap and the expectation was that chaps who went to Osborne would be good eggs, play a straight bat and not behave like cads, rotters and bounders. In 1908 George Archer-Shee started at Osborne aged 13.

In August of the same year, another pupil, Terence Back, received a postal order for 5 shillings; because a chap need tuck. An agricultural labourer in those days was on 10/- a week. The same day, young Archer-Shee went to the village Post Office to purchase a postal order to buy a model train set. Somebody forged Back's signature, cashed his postal order and was given two half-crowns by the elderly post-mistress. The authorities at the school carried out an investigation when Back reported his postal order had been stolen from his locker. Called a hand-writing expert and the post-mistress and convinced themselves that young Archer-Shee was a forger and a thief and asked his parents to take him away. Could it be that, like L'affaire Dreyfus across the channel, the Archer-Shees were the wrong [R.C.] religion? And Irish? But you don't mess with the Archer-Shees! The family wanted a court martial or a proper trial and more importantly they wanted their good name. It took two years of dogged determination, and a lorra money, for the school and ultimately the Admiralty and the Government of the Day to eat humble pie and acquit young George. One of the key things that money can by is the Best Lawyer and the Archer-Shees instructed Sir Edw "Home Rule" Carson KC to act for their boy and their rep.

It became a national political hot-potato and a cause célèbre internationally and eventually George Archer-Shee retrieved his good name and a truly mighty amount £7,240 for costs and compensation from the Admiralty. Given the then current rates of pay, that's enough to crew a WWI destroyer for a year excluding grog. George left Osborne and gone to a civilian school. At the outbreak of war, he returned home to join the colours, shipped out to France, and killed there on 31 October 1914 not yet old enough to vote. Three days before, Edward Carson's nephew had been killed serving in the same regiment. Less than two weeks later AEJ Collins, boy cricket star also died. The old Lie: Dulce et decorum est pro patria mori.