I R retire and feel quite a bit like Mr Chips when somebody wants to friend me on LinkedIn and I can't put a face on them. In my second year teaching remedial math, I had a class with a handful of youngwans who all had medium length blonde hair and it took me the whole term to reliably get their names right. My name is Patriarch. But some stand out because they were funny, or clumsy, or made a good fist of their research project. That second year, teaching lab sections for 1st year biology, we came to the microbiology part which requires Petri dishes and Bunsen burners. Who's got a lighter?, I asked and nobody came forward, so I had to find a work around (and a lighter). In my day, many students smoked, so lighters were always available. A couple of days later, I was stopped in the concourse by Gary: "I put a box of matches in the top drawer in the biology lab, in case they're needed in future". Gary & I shared a building and sometimes a laboratory over the next tuthree years. He won his class's Community Service Award one year "for services with The Order of Malta". It turned out that, as a tween, he'd started going to weekend GAA games with a relative who was a fully trained first-aider of Malta and liked the uniform being useful [like the matches, above]. After his degree he got a job, but also enrolled in an evening MSc with which I had some peripheral involvement. Gary was the GoTo guy for all the foreign nationals for whom English was a second language and Ireland was a cultural jangle jungle. 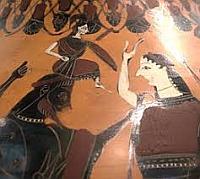 Gary didn't lick caring about/for others off the stones. There was his 1st-aidy relly who had presented a role-model and a chance to try first-aiding as a way of life. And I presume his Irish Mammy, had somethhing to say in his raising. As Linus Pauling quipped "The best way to get a good idea is to have a lot of ideas". If you try lots of things [not incest or morris dancing!] you're more likely to get a good fit for your true self. Actually, I don't believe your true self appears >!shazzam!< fully formed at birth like Athene from the head of Zeus [R]. It emerges by the buffetting and buffing of experience with people, things and situations. As the chips are knocked off your shoulders, you fit better and become happier. But I'm not a blank slatist either: genetics plays its part in shaping what's possible.

The Boy lives on the outskirts of the second most expensive place to live in England. It has a university, an excellent rail link to London, nice parks, a lovely river and it drips with 2,000 years of history. The city also has people without homes. Julian House, a regional charity, started out as a homeless hostel and has grown into a multi-tasking power-house for helping the dispossessed. Charities need money to provide their services and fund-raising is vital for lubricating the wheels of change. Julian House has been associated with the Bath Half Marathon for 20 years, for example: fit people run and their pals pay not to run. Several years ago, Julian House started a Spring sleep-out in one of the city's lovely parks and invited people to experience rooflessness for one night. Everyone agrees and acknowledges that being without a roof is not the same as being without a home. And also that one night is a jape, compared to the relentlessness of finding a safe dry place to kip every freakin' night of the year.

When she'd just turned 5, Gdau.I did the Big Sleep-out with her Da; and they've been religious about returning every subsequent year: the year it rained all night, the year he got shouty, the year they went with Gdau.I's pals . . . this year the park is covid-closed, but the gig goes on! And this year Gdau.II was big enough and sassy enough to join the party - even if it was just the three of them in the back garden. Not unexpectedly, the youngest slept best despite the temperature dipping below freezing. It's always darkest before the dawn, but every day the sun rises: 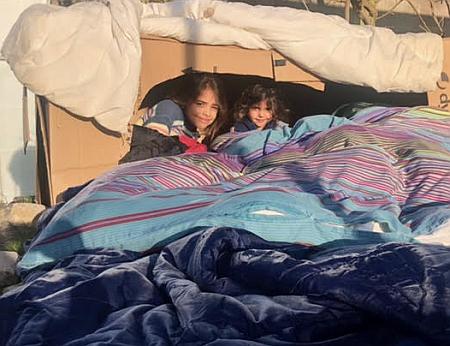 It's early yet but the G.daus are probably on a college trajectory. I'm pretty sure they will grow up match-girls, like Gary.
Posted by BobTheScientist at 07:17