Did you ever look at your hand? I mean really look? Like Hugh MacDiarmaid looked? It is a kludge, a bodge-up job developed from a generic mammalian pentadactyl limb. That same blueprint having been modified to make a horse's hoof and a bat's wing and the retractable claws of your cat. We can do so much with our hands: split wood; sew a seam, write copperplate, type Blob, change gears, open a jar of marmalade.

Most of the work for these disparate tasks is carried out by muscles in the fore-arm which obey the puppet-master by pulling tendons which flex the finger joints. Nine of these tendons [two for each finger, one for the thumb] and a fat nerve bundle pass between the bones of the wrist and chunky slab of fibrous tissue called the flexor retinaculum which keeps thing tight. Sometimes, however, things get a little too tight because the tolerance is so fine. If your fingers flex a lot, then they get hot and the local lube cannot dissipate the heat quick enough and the parts start to swell which spirals the problem into a crisis of pain and pins-and-needles. So that's typists and chicken-boners and others who carry out repetitive tasks for too little money. Carpal tunnel syndrome, as the crisis is called, is also another cross to bear for those with rheumatoid arthritis RA where there are autoimmune lubrication fails. When Jim Kent, furiously writing the code to analyse the human genome, immersed his wrists in basins of iced water, he had a desperate but effective solution for meeting Blair and Clinton's We Two deadline.

Maybe 20% of adult humans experience "pain, numbness, and/or tingling in the median nerve distribution in the hands" and in maybe a third of those cases carpal tunnel syndrome is fingered. The the hand is intelligently designed, users will write "could do better" on the engineer-in-the-sky's end of term report card. 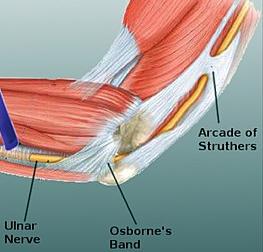 For some folks, the tingling in the hand and fingers is nothing to do with tightness in the carpal tunnel but further up the arm at the next bottle neck. At the elbow, the humerus has to flex against the ulna and radius to get the fingers on the keyboard, or carry out the many and varied tasks required of the human fore-arm: steering the car, hammering the nail, eating the pizza. The biceps and triceps are attached to the bones at knobs called epicondyles and the forces generated can be mighty. It is vital that the joint itself does fail and the bones are held together with bundles of connective tissue which are tough, minimally elastic and able to maintain tension. One of the engineering essentials was discovered long after the heyday of anatomical naming-of-parts from dissection of cadavers. It was first described in 1957 by an orthopedic surgeon called Geoffrey Vaughan Osborne, MB, ChB, MChOrth, PhD, FRCS, born in Wales, trained in Liverpool. In 1957, he described and number of cases of ulnar neuropathy - numbness and tingling in the little and ring fingers - almost all of which he decided were due to compression of the cubital tunnel at the elbow. The ligament / band / arcade which now bears his name forms the roof of the cubital tunnel.
You can get relief by elbow-focused massage or a bit of nip-and-tuck surgery. Osborne [to a surgeon every remedy looks like a scapel] preferred surgery. The interesting thing about Osborne's ligament is that this essential part of elbow engineering is missing in a substantial part of the population. Anatomical polymorphism may remind you of this isn't-variation-wonderful party trick. Touch the pad of your ring finger against the thumb and flex your wrist. For most people a prominent cord will appear in the middle of the flexed wrist running from the palm up the fore-arm. But for 5 - 25% of the population, [meeeeee!] no such cord will be seen because the palmaris longus is missing. Because it is therefore apparently inessential, the palmaris longus is often mined for tendon-replacement surgery. How neat is that?
James O'Brien is a freak of finger.
Posted by BobTheScientist at 07:50