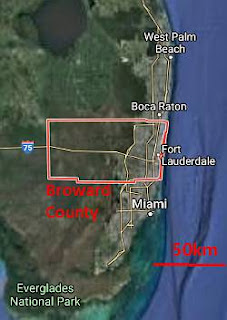 Florida is a pub-quiz distinctive state, no? If you were presented with an outline map of the USA, how many states could you identify? More if I gave you a list of all 50 and you could check them off: if that's Wyoming, this must be Colorado. New Mexico and Arizona are down in the SW with a lorra desert but is it AZ NM or NM AZ? Did you know how much trouble there was assigning two-letter abbreviations to states who {Mississippi Michigan Minnesota Missouri} gets MI? But you'd surely clock Florida: it's the dangly one in the SE pointing at Cuba. But even if you'd spent a week at Disney World, you might be stretched to name the ten most populous cities in the state [Orlando is 4th]. I learned a lot after being told that Osborne Reef was the responsibility of Broward County.

The reef? The reef! It seemed like a great idea when promoted with shiny-eyed advocacy.  A reef off-shore from Fort Lauderdale would provide a refuge for [game] fish by extending some existing patches of reef off the coast. Reefs are known to mitigate the battery of on-shore waves in rough weather; remember that the Florida coast is ever waiting for the next hurricane. On the other hand, Florida is the third most populous state of the Union; and every 'Merkin needs a car; and you can only retread car-tires thrice before you're down to blowoutable metal. Florida therefore has mountains of old auto tires. Bundled up with steel cables they could be sunk off the coast, shellfish larvae would settle, coral would grow and soon the tires would covered in a natural, not to say beautiful, habitat for fish, invertebrates and recreational scuba-divers.

What could possibly go wrong? 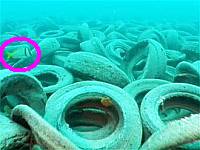 With appro from the US Corps of Army Engineers and authorization from Broward County, in 1974 Broward Artificial Reef, Inc. started to bale up 2,000,000 tires and dump them out over 15 hectares of shallow water a couple of miles off shore. See [L], I've flagged the one visible fish in a sea of toxic waste. But the steel cables corroded and the nylon cables abraded and the heap of individual tires wasn't stable enough to encourage colonisation. The loose tires whacked lumps of the adjacent real reef and then headed for shore where they became unsightly trash on the resort beaches of Fort Lauderdale.

It was clear by 2000 AD that the reef had to go but it took another 10 years before the task was off-loaded onto Innovative Readiness Training (IRT) program of the Department of Defense. The military piffled about getting salvage-dive training for their squaddies and raised 75,000 tires [about 4% of the total] over a couple 2008, 2009 of Summer seasons before the boys were deployed elsewhere. In 2015, the baton was taken up by Industrial Divers Corporation (IDC) with a contract amounting to $4.3million. Raising 4,000 tires a week, they are going to be at it for the next 15-20 years if they get 30 working weeks a year.  By, say, 2040, Osborne will be the reef that never was.