It's hard to be perfect

In my friendfacefree corner of social media, a participant solicited opinion on whether to unpal a friend who had skipped the local prioritisations and secured a covidaxx. The consensus was that such queue-jumpers should be shunned; for several because they had lied about co-morbidities. I've written before about my tetchy rejection of such Kantian certainty. YMMV but, for me, transgressions - queue-jumping, lying, assault&battery, plagiarism, murder, speeding - are sliding-scale rather than black and  white . A couple of contrarian responders to the vaxx-jumper dilemma suggested that the now-vaxxed friend would be better off entirely without the friendship of a judgmental mill-stone whose life had been clearly immaculate. Most folks are strongly against murder but murder books, even salaciously graphic murder books, sell millions of copies each year. There is a big fat intersection on the Venn Diagram between those who hold murder to be wrong and those who eat meat from animals that have been raised under unconscionable conditions and slaughtered in a clanking hell-scape of blood and guts. "I'm somewhat shy about the brutal facts of being a carnivore. I don't like meat to look like animals. I prefer it in the form of sausages, hamburger and meat loaf, far removed from the living thing." John Updike

Did someone mention Venn diagrams? That would be me noting the rather wonderful tribute to the eponymous John Venn in the form of a stained glass window in Gonville and Caius College, Cambridge. If you check out the link (nobody ever does) you'll note another stained glass trib below Venn's. This represents a Latin square to honor Ronald A Fisher, Sir, FRS - "the greatest biologist since Darwin". Indeed, I wrote about Fisher, in his own right, without mentioning the window because Fisher's serious contributions to biology, maths and statistics could fill a book let alone a 700 word Blob. If you've ever used a null hypothesis, or a t-test, or an Anova, or preferred Fisher's exact test to a ChiSq you shd thanks Fisher for providing the tools. The F-test for significance in that Anova is named F for Fisher. The New Synthesis reconciling Darwin and Mendel into an internally consistent view of evolutionary biology is due to the theorising and hard mathematizing of the numerate triumvirate of Fisher, Sewall Wright and JBS Haldane. 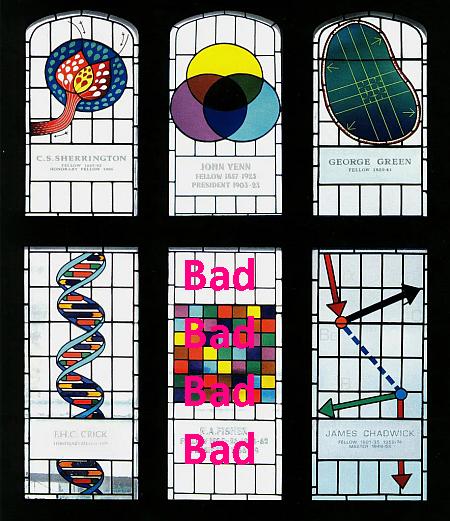 Well that window is now history! Removed last year because Fisher believed that the human race could be improved. The condemnation is two-fold: Fisher was a Eugenicist and Fisher was a Racist. Have you ever been on a march? Have you ever been gee'd up by the stewards to chant a slogan? Did you feel better for that? A sense of solidarity? Would you have been offended by the Orwellian epithet groupthink? Have you ever kept sitting when the rest of the audience rises for a standing ovation? Is August Landmesser dead?
Caius have not left it at the tokenism of removing the window, they have moved their diversity & inclusion policy to front and centre.
[✓]All Tutors and Admissions Tutors have completed implicit-bias training
[✓]All Fellows have been invited to a diversity awareness session to provide education about race issues
[✓]Appointed a Research Fellow for . . . advancing the goals of anti-racism

For a Cambridge College brimful of clever people, the narrative and the response has been quite woolly in its logic. Conflating eugenics with racism [and death camps] for starters. Some of this has been unpicked by AWF Edwards, an indignant fellow of Gonville & Caius, in an essay in The Critic. Edwards claims that the management at his alma mater had been steam-rollered into doing something because the spirit of the times was severely unsympathetic to The Man in all His patriarchal elitist sexist racist certainties. Me, I don't think that Fisher was racist, or at least rather less racist that many of his colleagues and contemporaries. But it's really hard to win that argument with people who are convinced that a) they are not racist b) most other folks are. I have Irish friends, none of whom are racist in the classic sense. Of course, they couldn't be my friends if they were anti-vaxxers racist. But let them check out their galvanic skin test response <frisson> to the word Traveller, let alone their innermost feelings if two lads with a flat-bed truck full of gates pulls into the yard. I fail that test and I've bought a lot of gates. Walter Bodmer, professor in his turn and Fisher's last student, has set out the case for Fisher's feet of clay in the Before Window times.

Fisher was usually the smartest man in the room but he was not always the nicest. He could bear a grudge. He was dismissive of people of contradicted him; especially those whose math wasn't up to understanding what he'd discovered and set out on paper. He smoked a pipe and was for years a lung-cancer denialist. He thought it would be a good idea to sterilise people whose progeny would not be an improvement to the human race. He associated with people who had probably been associated with the Final Solution in Nazi Germany.

It's classic blinkered patriarch stuff: his ideal of the best sort of person, who should be encouraged to have more children, bore an uncanny resemblance to chaps like him whom he met in the Senior Common Rooms of Cambridge. His cliché for who should be offered sterilisation was someone with mental problems. He wrote an academic letter of support for Otmar von Vershuer, Josef Mengele's mentor, unfortunately including a sentence praising vonV's "wish to improve the German racial stock".

As well as being willfully wrong about the association between smoking and lung-cancer, Fisher was wrong about the efficacy of sterilisation [or death camps, indeed] in improving any racial stock. His colleague and rival JBS Haldane wrote a classic paper showing a) that most genetic defects are recessive b) by definition they are rare c) Hardy-Weinberg showed that in such cases almost all the defective genes reside in 'carriers' where a 'good' gene masks, or compensates for, its defective partner. Haldane went on to show that eliminating all the double-defective gene cases would have negligible effect on the prevalence of the gene in the population and it would take hundreds of generations to appreciably reduce the frequency. We are less that 100 generations from Caesar Augustus and Pontius Pilate.

But the window?? I was trying to explain my unease and The Beloved offered a story "Suppose you're a small child enrolling in primary school, the head teacher is real nice, welcoming and inclusive but behind her on the wall is a picture of the founding head teacher of that school; stern of mien, with mutton-chop whiskers, a high starched collar, a bible in one hand and a cane in the other. What sort of message does that convey to the child?" And my response is something like yes yes of course and point taken but the youngest person who is going to have the window in their face is old enough to vote; going to college is about making up your own mind and it really helps to do that if your current way of thinking is challenged by the awkwardness of the real world. One of the press releases from G&C suggested that Fisher's interest / obsession with eugenics was the very well-spring of all his powerful ideas, techniques and theories in biological statistics. We cannot therefore brush his eugenics shite under the carpet as an aberration. One irony is that by providing the statistical tools for effective plant-breeding, Fisher was partly responsible for the Green Revolution [Norman Borlaug, I'm looking at you] which put an extra 1 billion people on the groaning planet; none of whom ever smoked a pipe or wore a tweed jacket or had a glass of port after dinner at high table.

Removing the window from public view and storing it in the basement s👁rts 👁ut the optics but really doesn't solve the problem of endemic racism in society . . . no more does a diversity awareness session. And while we're casting stones in Cambridge, maybe Churchill-was-racist College, 2km NW of Gonville and Caius, is due for a name-change?