Me, I live somewhere, as we all do, but I don't have a Home. As a navy brat, impermanence was the one constant in my young life. That restless trajectory continued until we bought a place we planned to settle in. Been here 25 years this Spring which is more than half my adult life. Our neighbours are sheep-farmers, all getting on in years, and a generous handful of tree-huggin' blow-ins like ourselves. The farmers are all getting on in years because very few youngsters want to stay in the valley delivering lambs and shearing ewes and sheltering in the lee of a hedge when a squally shower passes through. There are easier ways of making a living; even stacking shelves in Tesco yields more ready money than farming, let alone accountancy, banking, computers or dentistry.

As it happens there are two teenagers in the community who love the farming life with all its challenges and coups and want to live in the valley forever. Last year, I was appointed Heritage Liaison Officer for our hill and my unpublished report became a blueprint for creating a fulfilling income stream that might support these chaps in their choice of holding the fort, keeping a candle in the window of our community while 'most everyone leaves. If nobody repairs the thatch, there's no place to return to come Christmas. Blueprint would be far too grand for the clatter of half-ideas which I committed to paper. And don't get me wrong, farming is, so, a fulfilling life . . . it's just that the goddam income streams into other pockets. 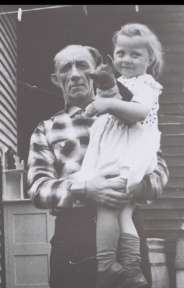 This go-or-stay dilemma was in our minds when Chris Hayes of HedgeRadio came up from the plains to do an outside broadcast about the Ringstone. Broadcasters get a lockdown passport because we'd all go fakkin' mad if we had nothing to listen to but the fever-bird and the kettle boiling. He wanted to talk about the Ringstone but he also wanted to talk about wresting a meaningful life from the uplands . . . because wool is "selling" for 15c a kilo this year. He cited an inspiring source for solutions to moribund economies in Zita Cobb [R, aged three with her Dad, the 7th generation of fishing Cobbs] , who was raised in Joe Batt's Arm [a competitor for the best town name on the planet] on Fogo Island [neighboured previously] off the N Shore of Newfoundland.

All the shoreline communities in Newfdl, except St.John's, are called outports and they all depended on the fishing . . . until they didn't. Rapacious multinational greed and a disastrous fisheries policy implemented by the Ottawa government succeeding in killing almost every fish between the coast and the 200 mile economic exclusion zone. In the first half of the 20thC, Canadian boats were landing half a million tonnes of fish each year. But the model didn't scale up, between 1950 and 1980, huge factory ships from Europe and North America stripped the ocean floor of more and more bottom-feeding fish. Peaking in 1968, the cod fishery collapsed to 13,000 tonnes in 1996: about 1% of the heyday landings. Around that time Cobb père went fishing all day and returned with one fish. 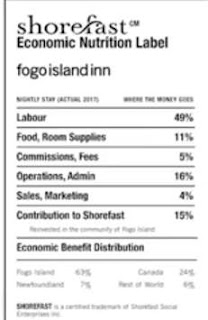 He encouraged his daughter to get herself an education and while she was in college her beloved Uncle Art, who lived next to the home-place, died and left her everything; which amounted to $300 and his tumbledown house on a rock by the harbour in Joe Batt's Arm. She couldn't do much about the house right then because she had to make her fortune as an entrepreneur and business whizz. Eventually, however, Zita and her brothers made good a promise to give back. First by endowing educational scholarships for Fogo Islanders. When that was characterised as haemorrhaging the social life-blood of the community, they endowed an 'economy of belonging' through the Shorefast community trust. Uncle Art's cottage was recast as The Fogo Island Inn, where visitors experience the magic of a place that's far away from far away. The people who change the sheets and serve the meals get a more certain income than ever their fathers wrested from the unforgiving sea. Every meal served, every item sold in the tourist tat shop comes with a an Economic Nutrition Label which spells out who benefits from every dollar the visitor spends.

The cod did come back, not like they ever were in the before times [swarming with fish, which could be taken not only with the net but in baskets let down with a stone, so that it sinks in the water] but fished from the depths on long-lines by members of the Shorefast Trust, and sold for good money [check the Economic Nutrition Label! 69% of the value is pumped back into the Fogo community] to discerning codophiles. That's got to be better than setting up a call-centre handling angry bank customers from Toronto. Ireland is particularly rich in call-centres full of min.wage workers who are kept from natural light for 9 hours every day.

Fogo is a long long way from here. Our teenage boy farmers aren't going long-lining in the R Aughnabriskey which bisects the valley and I don't see either of them as sous-chef in The Ringstone Resort Hotel . . . but something could be done that was fit for purpose in this our own community; with all its quirks and foibles and awash with social capital. Maybe it's time I came home.

Lynx: revitalizing Fogo Island Part 1 - Part 2. The Crisis of Belonging [Walrus transcript]
The Lock-keeper by Stan Rogers, reflects on the differing world-views of home-bodies and rovers Read The Lyrics:
But that anchor chain's a fetter
And with it you are tethered to the foam
And I wouldn't trade your life for one hour of home