I have a lot of time for Wade Davis, Canadian ethnologist and explorer, who had out of body experiences up the Amazon from a shamanic brew of this and that. He went on to champion isolated and marginalised communities like Inuit hunters and Polynesian navigators because each of those cultures expressed a unique way of being human and alive. When the last old wayfinder, the last old herbal experimentalist is gone, then that language, that interpretation of the human condition, is snuffed out. He has the most beautiful, compelling speaking voice. You could do worse than listen to him as the 2009 Massey Lecturer.

I was therefore surprised and delighted when a Wade Davis talking book appeared on Borrowbox. Into the Silence is the tale of the British Everest expeditions to Tibet in the 1920s. Whenever you hear some old grump complaining about how soft The Young of Today are, invite the old buffer to go back 100 years when youngsters really were well 'ard. And then reflect on how courage / folly is about pushing the envelope as currently constituted and that the goal-posts are ever-shifting. Gortex, Kevlar, microfibre, PET fleece make life outdoors much more comfortable and rip-stop nylon is a far better material for portable tents than canvas. But all that means is that hard chaws can stay out longer, go further, under sketchier circumstances . . . until they feel their own edge and step beyond it. 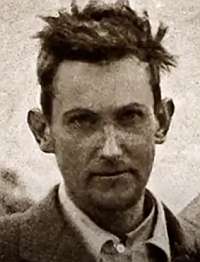 George Mallory [L in 1924 looking like Kenneth Branagh if you discount the ears] always takes centre stage in the story because he whom the gods love dies young.  A sentiment that Mallory [Winchester, Cambridge, Charterhouse] would have expressed in the original Greek of Menander: ὃν οἱ θεοὶ φιλοῦσιν, ἀποθνῄσκει νέος. Although he was a married man of 37 with three children when he passed Into The Silence on the top of the mountain in 1924. Nevertheless he was an extraordinarily charismatic bloke who caused some campy shivers at Cambridge in the 00s. "Mon dieu!—George Mallory! … He's six-foot high, with the body of an athlete by Praxiteles, and a face—oh incredible—the mystery of Botticelli, the refinement and delicacy of a Chinese print, the youth and piquancy of an unimaginable English boy."
In an era when people wrote letters and kept diaries, especially when on expeditions, Wade Davis has a lot of archival documentary material to read learn and inwardly digest. Codes of honour were such that a chap could write a scathing dismissive judgement of a colleague's moral and physical failings secure in the certainty that his journal wouldn't be opened to grass him up. In 1921, Mallory persistently had the hump for Edward O Wheeler, an accomplished mountaineer, surveyor and cartographer: apparently only because Wheeler was Canadian. I suspect that by having Canadians comprehensively dissed in the way may have been the trigger which induced David to research and write his book. 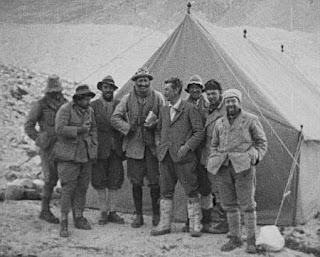 Knee-jerk racism applied in spades to the unEuropean members of the expedition who were usually referred to as "coolies" regardless of their first language or origins. The fact that these othered men, who had zero previous experience of mountaineering, climbed as high as the Brits while portering massive loads of supplies doesn't seem to have impacted the prejudice. In 1922, Mallory's ambition for the summit occluded his judgment to the extent of taking 9 Sherpa onto unstable snow too high up the mountain. The subsequent avalanche killed all but 2 of these employees whose families were compensated with a handful of rupees that seems niggardly to modern sensibilities. In 1924, John Hazard, required to bring a group of Sherpa down to safety after they delivered their loads, contrived through culpable negligence to leave four of the men behind. They were rescued by others the following day, imposing an unwonted load on the creaking logistics that may have compromised the whole expedition.
For Davis, the defining event for all the British Everest climbers was the First War. Almost all of the men were survivors from that awful conflict having witnessed the holocaust from far too close for sanity. It may have been hard to feel more than a perfunctory sorrow for dead Sherpas, whom they'd known for a few weeks, when these young officers had seen their own regiments scythed down like grass before the machine guns of Loos, Passchendaele and Ypres. Those unable to blunt their affect were often permanently incapacitated emotionally, mentally and physically. The discomforts of living for a few weeks in tents in Tibet in bitter biting cold where altitude made every action a slog, were as nothing compared to spending years on the Western Front in WWI. After a discussion about whether Mallory and Irvine died before or after they reached the top of the world, the final phrase of the book is . . . life mattered less than the moments of being alive. Which is a suitably Buddhist present moment envoi to a gripping yarn.
Note that you need to set aside 29 hours to hear the complete and unabridged story. If you're quick, before the copyright watchers take it down, you can watch The Wildest Dream [100 mins] a film tribute to Mallory and Everest on Youtube. There's also an informative essay on the discovery of Mallory's body 75 years after his final fatal accident.
PS. Whoever at Random House decides who reads these books and how, really needs to up their game. I cannot comment on how reader Enn Reitel mangles Tibetan and Indian proper names but I can tell him that arête is not usually pronounced aw'rite and Passchendaele is not passion-deli . . . I could go on. This is a problem endemic in all the talking books I've tried, with the exception of those read by the author.
Posted by BobTheScientist at 07:32