We had a meeting, possibly the last, of the Wexford Science Café on St Patrick's Eve. I had steered that Ship of Science away from more picking at the scab that is Covid: there is more to life and plenty other ways of dying. We were treated instead to a show and tell by Kevin Breen, Wexford's premier astrophotographer. It's amazing what you can do with a few hundred €€s worth of equipment and hundreds of hours of patient optimism. It's like fishing: if you can't peer through the clouds and temperature shimmers and see nothing the whole night - and still be having the most tremendous fun - then you're not a real astronomer.

One name that Kevin brought up in passing was Charles Messier (1730 - 1817) a French comet-hunter who got hooked as a teenager by the amazing Great Six-tailed Comet of 1744 aka Comet Klinkenberg-Chéseaux, C/1743 X1.  After leaving school, he started working for/with the official French naval astronomer and cartographer Joseph Nicolas Delisle, so his day job became his impassioned hobby and vice versa. Astronomy was glove to the hand of cartography, especially in maritime circles, because . . . longitude: the vital necessity for knowing where you were on the featureless ocean.

Competitive comet hunting - getting there first, with naming rights, and immortal fame - requires quartering the sky at night looking for something that wasn't there last week knowing that others are about the same task with younger eyes and better telescopes. It was wrecking Messier's head, and his autonomic nervous system, getting a heart accelerating jolt of adrenalin upon seeing a fuzzy smudge in his ocular lens . . . only to realise that he had indeed seen it before.

Soooo, he started, with help from his assistant Pierre Méchain, to catalogue these false positives together with their celestial coordinates. When he/they had enough to make the information formal, a numbered list was published as the Catalogue des Nébuleuses et des Amas d'Étoiles (1774). Subsequent editions bumped up the number of these distant objects to 110. Many of them are well known enough to have 'common names' as well as Messier numbersThe Catalogue doesn't include, say, the Large and Small Magellanic Clouds, because they are not visible from Paris, being in the Southern Celestial Hemisphere. 110 is a nice doable number, like bagging the 282 Munro peaks in Scotland higher than 3,000 ft. Michael A Philips is one amateur astronomer who has bagged them all and tiled the images into a single spectacular panorama: 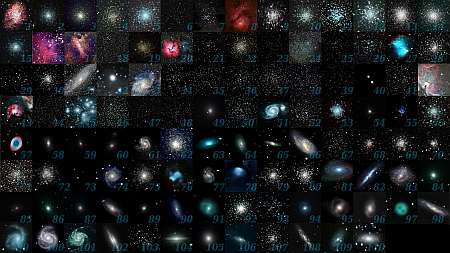 Absolutely nothing to do with Mersenne, Marin