Boots on the ground

Tomorrow, St Patrick's Day, we will have been in our current home for 24 years. On that day in 1997, more or less a year after we'd bought the property at auction, we threw a bit of a party for the builders and their families and slept that night on a mattress in the bedroom. It had been a massive undertaking for The Beloved, who'd acted as main contractor and made the electrician, the plumber, the well-diggers, the plasterer, the builder, the carpenter, ESB, telecoms, the septic-tank guy all do her bidding: not necessarily in that order and sort of on time. As well as minding two small children. At the end of the project, we had a warm dry home but we'd run out of money and run out of oomph and it took about a decade to recover our mojo for anything more than care and maintenance. 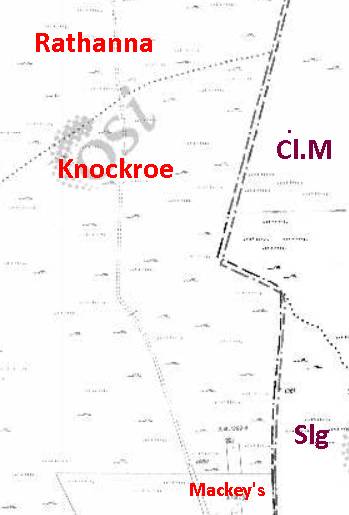 For example, we only ever went up the hill to explore the dry heathland, the scree, the bogs and the wee streams when/if we had visitors. As work wound down for me recently, I got out and about more and last year I was elected, as the only candidate, Heritage Liaison Officer for our commonage. I got interested in different aspects of what I called The Holistic Landscape of the townland. My Heritage Report included a number of suggestions about how there could be more, and more constructive, interaction between people and the hill. The 'problem' is that only two of our neighbours [both getting on in years] actually, from choice, run sheep on the hill; and on some weekends there are more hill-walkers on the hill than, like, sheep. That is what it is but with the shiny eyes of a convert, I like the idea of getting the children of our community up and doing on the hill and getting to know it as well as their grandparents did.

On the map, our Common is a roughly equilateral triangle with the Eastern boundary matching the County border and running more or less due North. Probably because it is the County border and land-holdings tend to stay within a single county, that Eastern boundary is tracked by a stone-faced earthen ditch for almost its entire length. But North of the last ruined steading [Mackey's], the walls on the ground rather abruptly cease although, on the Ordnance Survey map, the county border continues on with the same -.-.-.-.-. determination. On the Western boundary between Knockroe and the next community Rathanna, on the map, there is also a resolute . . . . . line running straight across the landscape. I suggested in my report that it would make a neat project for the local National School to beat the bounds between the two commonages. It would be partly a classroom exercise in cartography: latitude, longitude; grid-reference; triangulation and distance; rhumb-lines; true vs magnetic North; angles and bearings. And partly a yomp across the face of the hills, preferably with a borrowed theodolite and/or a borrowed surveyor  / cartographer.

That might never happen, or not in my lifetime. Last Sunday, before the rain got going in earnest, I powered up the hill to see why the Wexford border makes a little jink in its line between Slievegar Slg and Cloroge More Cl.M . Elucidating this small mystery received a massive leg up from the 1:25,000 map produced by Barry Dalby of EastWest Mapping. The detail on the map is down to the pixel, accurately delineating every wall and field boundary in the settled parts of the map. But there are also several straight lines across the rather featureless heathland landscape of the commonages. These must have been picked out from the satellite pictures: the human eye is super adept at discerning patterns out of random jumble. Two such line segments appear on Barry's map tracking the two North trending segments of the County Line. Civil boundaries don't register on these EastWest maps, whose purpose is recreational rather than political.

On the ground, these lines are revealed as longish sections of bank and ditch long since decayed almost to invisibility - except that that bank is drier and the ditch is greener. Between these man-made features the county border, trending NW, follows the line of a barely visible stream which gathers water to become the Aughnabriskey. That small river again becomes the county border just uphill from our fields; the stream and border being coterminous for about 400 m before parting company. I am possibly the only person alive who can point with confidence to the rock [L!] nearest to the triple-point where Knockroe, Rathanna and Cloroge More meet. That is the starting point for the Great Line of Demarcation of the National School Project.
Posted by BobTheScientist at 07:30