I was [am?] a navy brat. My father [was] retired at age 50 when I was 13. You can take the man out of the navy but you can't take the navy out of the man child. On the 20th anniversary of his death, it being a beautiful crispy winter's day, I was out chopping and stacking fire-wood. At some point, I felt a small intestinal growl and drifted up to the house. I glanced at the kitchen wall clock to see it was 13:02hrs and said ruefully to The Beloved "The Da is not dead, but sleepeth" [Luke 8:52]. Because in his retirement days, he too would drift into the kitchen at 1 o'clock ± 2 minutes asking what's for lunch?

Being a sea captain, he was often at sea for months at a time, and was quite distant even when present leaving the day-to-day to his XO my mother. But occasionally he'd put away the newspaper and make an effort to educate us. These learning opportunities were sprung on us at short notice and were [therefore?] hard to refuse. When I was about 15, I was out shopping with him. At the last stop before home [and lunch] he decided that he was going to teach me to drive the car. I sat into the driver's seat, he rushed through the theory, told me to select reverse gear and engage clutch. Which I did . . . the little car rocketted across the car-park and into a stack of bricks, breaking the nearside rear-lights. In fairness, he didn't get shouty; but we were late for lunch because we had to detour to buy a new set of light covers. 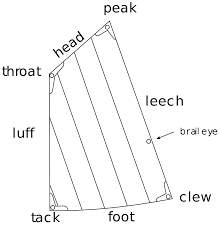 When we were growing up, we had a piano and on the piano was a truly wonderful model ship "The Princess" one of three [Duchess, Marchioness] which had been made for the daughters of my Great Grandfather John Craig, a Scots shipping agent. The Princess, a scale model gaff-rigged schooner about 800mm from jib-boom to counter, was made in the 1880s in wood and canvas with tiny brass nails for the planking. Occasionally, the Old man would gather his brood into his study and put us through a catechism of parts: so that we knew the words counter and boom and realised that each part had named sub-parts. For professionals, a certain amount of extra detail is required. For you and me, shin-bone will do, for an anatomist or medical student each knob and nodule and divot for muscle attachment has a name - and a function. For triangular sails, which have no gaff to support the head of the sail, the names of the edges and corners are slightly different. Square-rigged sails have two leeches [port and starbord] and no luff. It is of course vital that the parts of a working ship are minutely defined and the names internalised by everyone aboard. If a sail carries away in a storm at night, the captain and crew must communicate with each other precisely, speedily and possibly blindly if total disaster is to be averted. It's more complicated on real full-rigged ships: 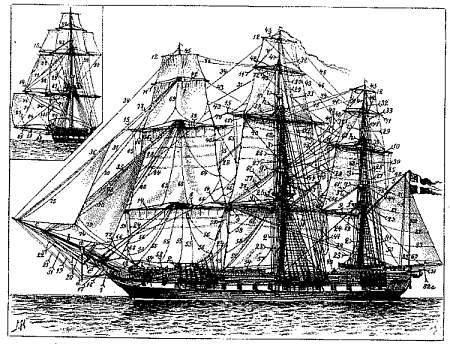 We did go sailing when we were kids; I learned how to conn a small boat reliably across the water and knew the difference between tacking [safe] and gybing [emergencies only]. But my heart wasn't in it. If the wind was light, sailing was boring and when the wind got up, terrifying. But from the comfort of the sofa, the salty green is in my blood and I love reading about those who go down to the sea in ships. Or you can play it for larfs.
Posted by BobTheScientist at 07:40