There is no limit to the ingenuity of engineers! Without engineers the fastest way to get a message from crisis to headquarters was to hand it to a gallopper on a horse or write it real small and strap it to the leg of a carrier pigeon. A horse rider is a large target in a hostile environment and pigeons are quite a way along the clueless spectrum and might get distracted by a spill of corn. If the message is simple you can light a fire on a beacon hill or a succession of such fires; but then everyone knows that something is up. In the ferment of the French Revolution, Claude Chappe invented a more subtle way of conveying optical information using signal stations with enormous semaphore arms to spell out messages. Eventually the whole country was spanned with lines of stations transmitting signals for the government - in code if necessary. Despite lamps, it never really worked well at night and fog put a damper on the whole enterprise.

Then along came Michael Faraday, one of the Great 19thC experimentalists. Playing about in his laboratory, electricity and magnets, he found that a moving magnet could induce an electric current in a coil of wire. This eventually became a dynamo which could use the rotating engine of a car or bicycle to power the lights. Actually I think Hans Christian Ørsted was first on the scene with electromagnetism, but it doesn't matter here who did what, when. Within a decade, the concept had been reversed by Charles Wheatstone and Wm Forthergill Cooke: a passing electric current could be induced to move an associated magnet. Cooke and Wheatstone ran with this idea to develop the first electric telegraph. The current could be forced to act at a distance and flick a magnet back and forth. If insulated, the wires would operate equally come rain or shine; dark or dawn. Their first clever solution to converting a flicking magnet into readable text is shown on the L. It required 5 wires that could control magnetic indicators so that they flicked Clockwise, Anticlockwise or [default] Middle. The pointers 1 2 3 4 5 were operated in permutations / combinations of pairs. The picture shows MMCMA which points to "G".  CMMAM MMACM CMMAM should spell BOB. You may have trouble spelling your own name: Jules, Banquo, Cox and Zoe. With only 20 possibilities on the board, Cooke and Wheatstone sacrificed letters which were rare or redundant: C J Q X & Z could be represented by K/S G KW KS & S. It made for some peculiar fonetik spelinge but was good enough to convey meaning unambiguously in 99.99% of cases.  How it actually works on a replica of an original. 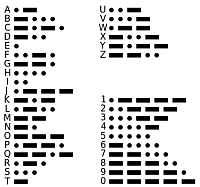 The problem with this prototype was that there were 5 thin fragile wires: a break in any one made almost all messages un-codable. Also 5 wires stretched across a continent was a helluva lot of wire. It took Samuel Morse to invent a cunning telegraphy plan that only used a single wire but required a little more training for operators because the information could only be transmitted a s a single pulse. Morse's code also switched from a visual signal to one that was audible - a series of short <dit> or long <dah> pulses. The letters are coded with 1 to 4 dots or dashes: in a not totally arbitrary and capricious way. The commonest letters in English are quicker to transmit than rarities: note that the letters requiring 4 symbols are the same as those left off from Cooke and Wheatstone's Ouija board. Although Morse started as a sound system, it was soon adapted for signal lamps at sea and elsewhere. When I was 9 or 10, I knew Morse code and could read and write it, but with my tin ear, I was crap at hearing it. It takes bit of training, such as you get in the Signal Corps of the army. My work-mates Gerhardt and Peter used to annoy the rest of us talking Morse in the coffee break.
Posted by BobTheScientist at 07:30