When the barn went on fire in the night a few days after Dau.I was born, we had a chance to save a few things before our home was engulfed in the roaring consuming conflagration. In the moment, I made a foolish call and bundled my new computer into a binbag and carried it out to the garden. I should have saved the photos - which weren't digital in 1993. [spoiler: the fire brigade came in time and I got a second chance with the photos] It's a decision we could all prepare for as we sort our parents' papers, and our own, because our burden-of-stuff is not all equally valuable. But beware of saving big ticket items and dumping the quotidian. You might think that those who come after would like another copy of the Life magazine celebration of Neil Armstrong's small step for a man . . . but you'd be wrong. Twenty consecutive years of bank statements, because ephemeral, will provide 22ndC historians with a unique insight into daily life in the late 20thC.

Remember that 94% of the plays of Sophocles were consigned to the flames by the ignorant. There is no evidence therefore that the saved 7 is the cream or the froth or just a random selection of his insights into the human condition. 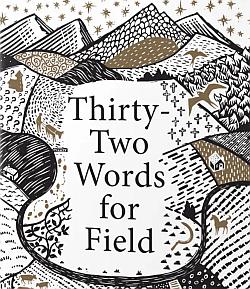 Manchán Magan, performer and recorder, has become gate-keeper for the Kerry dialect of Irish and made The Selection for what to save from the words he learned from his grandmother Sighle Humphries, who was a storm petrel for Pearse and Connolly 100+ years ago. Largely, it seems, through the force of her personality, Manchán was raised first language Irish in a leafy Dublin suburb besieged by Bearla, and distracted by Lego, Star Wars and Bazooka bubblegum. But every Summer, he'd be hangin' with Sighle's neighbours - hauling water, seaweed, milk and hay as a small helping hand on the micro farms of the West and consuming Miwadi & biscuits agus an teanga for/after his labours. He's written it down, in big print, because most of his informants are old, with sight and memory failing; if not already passed on to Tír na Neamhní - and published it as Thirty-two Words for Field.

So this is a book like Jorge Luis Borges' Tlön, Uqbar, Orbis Tertius: describing the language and culture of a land that is probably mythical and certainly ungraspable and only available to us in the partial, selective writings of a single surviving witness. "By extracting the wisdom and memories contained within a place name, through a mixture of analysis and intuition, we can cast light on the profound truths about people, gods, and nature". And why not? I'd prefer analysis and evidence but acknowledge that evidence is only what a group of people agree to be the truth . . . for the time being. So our scientific certainty is not always demonstrably better than the intuitions of someone who is deeply immersed in the data story.

I was so excited when our alphabetical top pals A & B gave us a copy of 32 Words, because I thought it might be 32 chapters long with maps charting out the geographic and cultural spread of each of the words like Zimmermann and O'Hara's agri-townland analysis or Eugene Costello's deep landscape; indeed The Blob's own Holistic Landscape. It is not that; it is both richer and more discursive, with lists of names pertaining to fairies and stones as well as fields. Like Simone Kotva's extensive ruminations on Faeroese bird-names.

One interesting assertion is that the Irish [people and language, both] tend to use cardinal points N E W S in their directions [like the Guugu Ymithirr] as opposed to the speaker-centric Second star to the right and straight on 'til morning used by most other European languages. But that's just not true, everyone knows that Irish people give directions by pubs "Turn left at Cahill's, along the road a-piece, then right at Mulligan's".