You can't make an Omelas 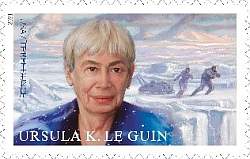 . . . without breaking eggs. The USPS, which contrived to lose the package P sent me in July and offered no effective remedy, has redeemed itself in a tiny way by promising the world a 3oz Ursula Le Guin stamp. It will become available sometime this calendar year and cost 85c. Ya gotta love Le Guin, unless you are The Man or really smug in your cosy status quo. It seems appropriate to post [har har] about her and all her works on the day when US politics turns over a new leaf; and we a briefly hopeful that all will be well. In the fight for the fat demographic [I am talking about the bell curve not the waistband of America] of the middle ground, successful political parties get to look increasingly indistinguishable. Writers like Le Guin can imagine, and present, alternative versions of reality; which may make us think a) how we live with each other is utter crap b) could do better. "We live in capitalism. Its power seems inescapable. So did the divine right of kings." is a quote from her acceptance speech for a Literary Award in 2014. In those 5 minutes she ironically and adversely de-constructs the industry which brought her to prominence . . . and the podium from which she delivered her acerbic pfffff collapse of stout party remarks.
Two years ago, I wrote about her being kind and constructive to a much younger writer. And you're never too old to read Earthsea.

If you have 18 minutes, you could, with advantage and probable discomfort, listen to a reading of Those who walk away from Omelas:

""With the clamor of bells that set the swallows soaring, the Festival of Summer came to the city of Omelas, bright towered by the sea . . .

They leave Omelas, they walk ahead into the darkness, and they do not come back. The place they go towards is a place even less imaginable to most of us that the city of happiness. I cannot describe it at all. It is possible that it does not exist. But they seem to know where they are going . . . those who walk away from Omelas.""

We don't have to accept injustice, inequality and cruelty just because they are hard to discard.