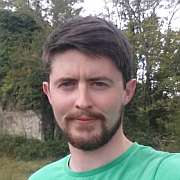 Not that one! This [L Dr Eugene Costello, UCC] is the bridge-builder for whom I was setting the scene yesterday. I was alerted to a Zoominar last week in which Dr Costello was talking about Uses of Uplands. As a reculer pour mieux sauter he has been investigating past patterns of land use to better inform policy about how to manage this precious resource for our grandchildren. He's particularly interested in the almost lost [on these islands] practice of transhumance which I covered in a colour supplement a couple of years ago.  On the very top of our hill is the ruin of a two-room cottage which, I learned this Summer, was the summer lodging for Mrs Blanche's shepherd. Mrs.B sold that 200 hectare section of her patrimony to a consortium of commoners in the 1940s and the shepherd lost his job. The commoners continued to run livestock (mostly hardy black-faced sheep) up the hill for the Summer while the winter's hay was growing on the in-bye fields in the valley. But each year, fewer and older people used the hill in this way, the rest finding it more efficient [and warmer] to make money filling in application forms at the kitchen table rather than seeking sheep in the wet mist.

Costello has written The Book on Transhumance and the making of Ireland's Uplands. But he's also written a very interesting paper: Hill farmers, habitats and time: the potential of historical ecology in upland management and conservation. Which is £75 = €83 easier to read. His thesis is twofold:

Costello's paper describes two valuable painstaking investigations focusing on past trees in his Kerry valley. One was a book-l'arning catalogue of place names, similar to Zimmerman and O'Hara's catalogue of places associated with grain-farming. Scoping out all those Doires, Doiríns, Coills, Crannachs tells us where trees grew in The Before Times, but where sheep and fire have erased all trace now. Pollen cores are another way to access these data. Surely the place to start afforestation, if that's what the situation demands, is where trees grew previously. And indeed which trees. There might be something in the mineral content of the sub-soil or an invisible aspect of micro-climate which favours trees. Better than random, for sure.
And did someone mention burning the wood . . . as a matter of deliberate practice? My polymathic pal Mick Monaghan is convinced that a string of horizontal platforms along the downhill edge of the Blackstairs commonages were created to pile a stack of timber to make charcoal for the iron foundry in Enniscorthy 15 km to the East on the River Slaney. Costello reaches similar conclusions for Bunbinnia, Co Kerry. 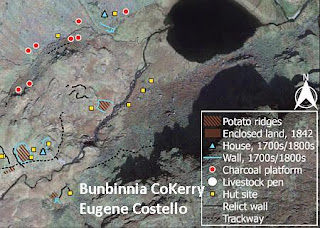 If charcoal commands a price, then it can be produced sustainably through a system of coppicing. Woodland and sheep don't mix but if you can give the woods a head-start and the stocking is not too dense it is possible to diversify the habitat and support a greater range of species. There is a hint in the place-name data that woods existed in gullies, draws and cliffs which are inclement for sheep. Thought-provoking stuff.
Posted by BobTheScientist at 07:42