Samuel Smiles, social commentator of the Victorian era wrote books called Thrift and Self-Help which claimed to show that anyone could pull themselves up by their bootstraps . . . why look at this rags-to-rich anecdote. I'd be more skeptical now about anyone could than I was when I was 15 and studying the history of Victorian England at school.  Nevertheless, I get smug a detectable feeling of satisfaction when I can make something from somebody else's discards. Being able to make soup out of potato peelings is going to deprive the worms in our compost heap; but heck, them's the privs of patriarchy. 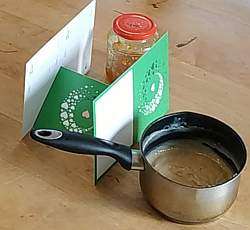 I'm not quite halfway through a 12 day lock-in up the mountain having lent my Yaris to a repatriatee in quarantine. With bunkering for Brexit [6kg of fusilli pasta = sell-by 2022; lots of tinned tuna = sell-by 2025], I'm not going to starve. But I'm eking out the remaining bits of Christmas cheese and salami to act as a Jeffersonian condiment to go with winter brassica, carrots, potatoes and . . . fusilli. I'm a dab hand at cooking up something from behind the fridge, to get a few more days of shelf life. Talking of food on the edge-by, I noticed that the litre of milk, which I only use to dribble into tea, was due to turn tomorrow and still half full. I decided that I'd make custard or rather, as you see [L] custard à la beige; (it's the brown sugar innit?) that can pretend it is cream when I add a blut of it to the stewed fruit, of which I have a surplus. You can see [Above] that I am also working through the 2021 season marmalade. The green cards behind which the marmalade is demurely lurking are courtesy of An Post: I can now greet six anyones on the island for free. Like last year.

Last Summer, as part of the BFF Repurpose The Uplands project, we decided that removing the alien invasive gorse / whin / furze / bushes Ulex europeaus from the hill would give a boost to the heather and grass which feed the sheep. It was a grand meitheal all together: but left that section of the hillside littered with upended gorse bushes. 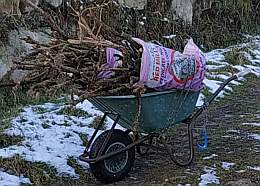 My experience of clearing gorse from field edges and wall tops is that it makes better habitat for small creatures, and rots down quicker, if you I trim the spiny brash off and leave the 'logs' in a separate pile. Gorse burns hot and quick and so makes an important contribution to the fuel for a wood-burning stove. It has been on my mind to lope up the hill and bring down anything that could, after trimming, pass for firewood next winter. Yesterday Monday 25 Jan was the perfick day: high blue skies, bright sun driving off the remaining patches of snow, everyone else supposed to be working from home. I set off with a light heart, extra socks and my hedge-loppers after postie had delivered my free postcards. Glorious! If I can't access my pensioner's free travel, at least I can get free fresh air. This benefit of living remote sure compensates for not having shops, cinemas and pubs within walking distance like you city folk. I spent an hour lopping, chopping and dragging. After lunch I pushed my wheel barrow up and brought a handy load down - gathering winter fuuuuuel, indeed.
Postscript. In the evening, I decided to try some of the beige custard with a slice of very old Christmas pudding [it lasts forever]. I popped the escalope de pudding de Noël à la crème anglais in a moderate oven but was immediately distracted by 2 consecutive phone calls. By the time I got to my dessert of choice, it looked crusty: like the nightmare institutional cooking unwell people are presented with at St Ghastly's Indigent Infirmary. After my day of outdoor work, it would take more than looks to dent my appetite; and I scarfed it all down quicker than a Jack Russell eating the cook's own sausages.
PPS. That was yesterday, this morning 'tis raining hard, a sou'wester day, not a day to be out on the hill at all, carpe diem me hearties.
Posted by BobTheScientist at 07:40