A man of principle 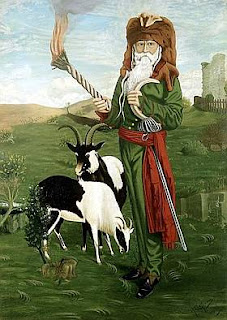 William Price [R in full dress cosplay], arch-druid, cremator, vegetarian, nudist, Welshman died this day 23rd Jan 1893 in the fullness of his years, having been born in 1800. His mortal remains went wooomph in a plume of carbon footprint stoked by 2 tonnes of best Welsh steam coal from the Rhondda. It's easy to label him nutty as a fruitcake because we still haven't got round to adopting all his peculiar obsessions: most of us wear socks, for example, and doctors generally treat patients even if they smoke tobacco. Indeed, doctors are even at this moment treating pandemic-deniers in ICUs across the world rather than inviting them to lay in the bed that they have made.

[One of the teeth-grinding outfalls of the Report on the Mother and Baby Homes [yest], which was released on 12th Jan 2021, was the refusal of pethidine by midwifes attending young unmarried women . . . because sin requires retribution].

Price's father was, by contemporary accounts, unhinged: talking to trees, collecting snakes and raging at his neighbours. But in those distant pre-medication days, there was more tolerance of peculiar behaviour, so long as everyone knew where your people were buried. I'm sure they were just as good as we are at scapegoating strangers, jews, blacks and other Others. The younger Price trained as a doctor and was inducted into the Royal College of Surgeons of England after rubbing shoulders with the great and the good for several years in London.

Returning to general practice in Wales he secured a few sinecures posts as Works Medical Officer in several industrial enterprises in and around Caerphilly. He was also active in the Welsh Nationalist movement and embraced Chartism - one of the early universal [male] suffrage movements in Britain. While in self-exile in Paris - Chartism having been violently suppressed - he decided that he was appointed to be leader of his people and returned to Wales as arch-druid of the Old Religion. This did not dance particularly well with The Man's ideas of an Established Christian Religion which called the shots for everyone.

Things came to a head when, very late in life, William Price married a local girl Gwenllian Llewelyn 60 years his junior with whom he had a son named Jesu Grist pour épater les bourgeoises, like. Instead of growing up to lead his people to the promised land, young Iesu died in infancy. Price's religion didn't hold with burial and so he cremated his son and heir on a hill outside Llantrisant. The neighbours were appalled! Accusing him of infanticide and blasphemy they geed each other up to throw the first stone until the grieving father was rescued by the police. In court it transpired that, although it was not customary to cremate bodies in the United Kingdom, nobody could turn up the statute which forbade the practice; and Price was exonerated. The events were super newsworthy and opened debate and started acceptance of the practice across the country. When he himself died almost exactly 9 years later, his cremation became a huge raree show attracting 20,000 people. Si monumentum requiris circumtecte

His wife Gwenllian lived on for another half century, only dying in 1948.