My father's cousin Posy lived on the shores of Lough Derg in a Georgian mansion 'hunting lodge' whose lawns swooped down to a little quay at the lakeside. It was impossibly romantic. We'd stay there for a few days most years and get up well before breakfast to row out on the mirrored lake before the breeze began to ruffle the surface. My sister was the best swimmer of us all and took little persuading to plunge in. She got out PDQ when her evil-stirring brothers suggested that there were pike Esox lucius "as long as yer leg" lurking in the reeds ready to savage little girls. Cousin Posy was well 'ard and used to swim off the end of the quay every day until she had to break the ice with her fists to make progress.

Wildwater swimming is a minority sport still. One of the books of their bible is Roger Deakin's Waterlog which tracks his adventures swimming across the inundated field systems of the Scilly Isles and thence across England. That is a great, evocative book, but I can't see it myself: Irish water is cold even at the height of Summer and brutal in Winter. When m'daus were small they regularly begged me to go swimming in the local pool and occasionally I'd reluctantly agree. The last time I went, I saved a large lady from drowning which impressed on me that swimming is not only cold and wet but also dangerous. Read Drownproofing everyone!

Well m'sister the selkie has taken to the water big time in recent years although the sea was often in her hair when she lived on Erraid in the last century. I sent her a parcel of links from RTE [podcast with text] about the swimming without really reading them too closely. Swimming certainly has the potential for inclusion: for the elderly with dodgy knees and hips, for folks with MS, for the dispossessed in direct provision. 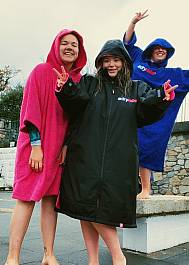 But these positive outcomes have run in parallel with a darker side to shared spaces when Coronarama drove a new cohort of people to established swimming holes. If Dundrum Shopping Centre was covid-closed, trendies would head for the 40 Foot in "dryrobes" [comely maidens in, R], a fashion-accessory that incensed the old stagers who were there for, like, the swimming. It didn't help that the in-blows were intent on documenting their experience for their Insta-pals.  It would piss me off too, if I thought that my saggy moobs would feature as part of the 'authentic' back-ground for a random young-wan's selfie. It's not so long ago that 40 Foot was men only because half the ould buffers went plunging in the buff. Well, I hope they resolve their differences; after all the water is wide, there should be room for everyone.