I am a fan of Bill Bryson.  his Lost Continent was the funniest book I ever read on the recommendation of rec.arts.books - which was part of Usenet; which was social media before the World Wide Web turned the internet into something altogether bigger and uglier. In November last year, I saw that an audiobook of him reading his own The Body; a guide for occupants was available on Borrowbox . . . but not until 30 Dec 2o2o. So I reserved it. The very next day, last of 2o2o, I was on a road trip to Cork and picked up a big box of Seville oranges. While the kettle was boiling, I took advantage of Dau.II's unlimited WiFi to download Bill's Body to my smartphone. Such an inconsequential act would have taken many minutes over our rural "broad"band, even assuming our bandwidth neighbour wasn't on a Netflix jag. 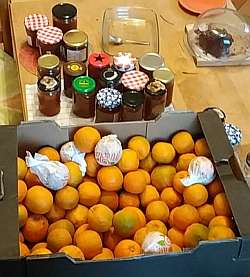 The next morning was the First of 2021 and I reckoned that the oranges were not going to marmalade themselves. Accordingly, like Leap Day 2020, I cherry-picked as many oranges are would fit into my tallest and most capacious saucepan and set it to boil-then-simmer for 3 hours. I could / should have halved the fruit before packing and cooking them but forgot to do that . . . because I R old, forgetful and can't read my own notes. This is the easiest part of the Marmalade Protocols because it is perfectly possible to let the fruit simmer and multitask about the house: emptying the grate; counting the sheep; making tea; making water; gathering Winter fuuuelll. Note to self: I went at it again on 2nd Jan because we had sugar and jam-jars sufficient unto the task. This time with hemispherical fruit - this allows only about 10% extra packing.

But this is just the lull before a storm of pain as the fruit are eviscerated with a sharp knife and a scooping tablespoon. It's quicker and more fuel efficient to do this hot, but begod ye need asbestos fingers. That yielded 4-and-a-tad pints [~2.3 lt] of pulp which will take 4kg of sugar by past experience. The skins were rough-minced with m' trusty Spong mincer and cast thereto.  Actually those quantities are about twice as much as can be conveniently handled with my ⌀ 40cm jam-pan; so I split the task into two batches. The second batch was cooked a little longer than ideal and so will support a standing spoon as well as being darker in colour. By tea-time I had 17 pots of marmalade: sealed, labelled and ready for the Armageddon bunker.  By tea-time the following day I had another 17 pots full of the warm south. Outlay in cash makes it about 75c /pot for quality [organic] 3 ingredient [water sugar orange] calories. And I still have 6-7kg fruit à la peau.

It certainly helped the yaroo pain to have Bill Bryson burbling along in the background about dermis and the microbiome. But I'd much prefer to be meithealling the marmalade like last year; although that is unconscionable under Coronarama Rules. The day's work really hadn't made much dent in the box of fruit, so I anticipate cooking through the current lock-down until I run out of jam-jars. Then I will freeze any remaining oranges until the jar-fairy delivers more. On the way down to Cork, Dau.II and I were speculating about whether the process of freezing might actually generate the better product - because the cells of the oranges get bursted by the formation of ice within. A bit like bletting?