I won an election! Single candidate, single party Viva Blobista!, tiny electorate. As the new Heritage Liaison Officer for our commonage, I am licensed to yomp across the hill paying attention to some of the details: rocks, plants, beetles, spiders, birds and the built environment.  I am particularly interested in the latter: where human sweat and broken fingernails have changed the living rock into things with human utility: lintels, sills, walls, pillars, shaughs, dwellings, tombs, altars. But also remember that the whole upland, dry-heath landscape is creation of human activity: without sheep there would be bog or forest. Mutton and wool, and their getting, have given a two century long pause to the natural succession.

Last Wednesday was a Perfect Day: sunny with scudding clouds driven by a warm damp Westerly wind and I had the entire 200 hectares of mountain to myself. I tasked myself to establish GPS coordinates for the more obvious landmarks on the hill. The Marian Year (1950) Cross; The Giant's Table; Dreelan's, Mackey's and The Great Shaugh. It was on the dot of lunchtime when I arrived at the Giant's Table: a chunky dolmen on the East ridge of our hill. I'd made me a sandwich with cheese and lamb's lettuce Valerianella locusta stuffed into half a homemade chapatti and Bliss was it in that lunch to be alive. But soon enough I was heading downslope to flatter land known as Mackey's Walls which is a ruined steading NE of the Giant's table. 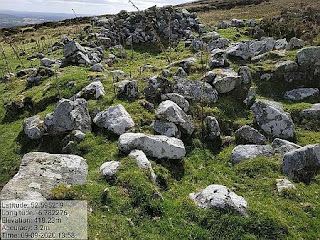 That humble dwelling consisted of three rooms, one tiny and a two room shed [granny-flat??!] just to the West. Our family know it as Mog's Bothy because that's where The Boy used to go camping. The Mackey haggard has about the only patch of levelish dryish grass on which you can pitch a couple of tents. When his sisters were small, he'd take them up there for an overnight of magic, wet socks and pee in the bushes. Mackey's is interesting because of a row of five [one missing, one leaning] substantial squared granite pillars running parallel to one face of a rectangular walled enclosure: 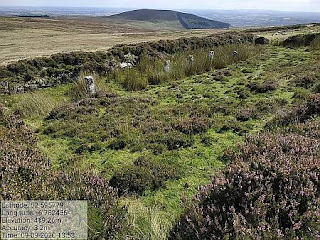 I think they must have supported the front edge a roof extending back to the wall, although a man couldn't have walked upright underneath the rafters. Mystery, really. The other notable feature is that a rather precise half acre of, now heather-covered, lazy-beds fills the higher Western half of the haggard. 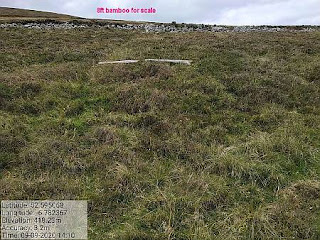 Lazy-beds is a rather pejorative term used for the potato Solanum tuberosum ridges which sustained the plain people of rural Ireland before the famine. Parallel trenches were dug and the spoil heaped up between. Spuds were planted into the ridge and earthed-up (with dung, rotted straw, seaweed if convenient) during the growing season to keep the tubers out of the sunlight. Unless you know to look and what to look for, you could miss this evidence of how folks lived 200 years ago. I was talking to Chris Corlett [prev and prev and prev] afterwards, about my finds and he said that [2.4m] wide ridges such as Mackey's were far more likely to have supported oats Avena sativa. and the oats, as in Scotland, supported the people. He said that he'd found evidence of such oats growing 1,000 feet up in County Wicklow. The hardy scallion-aters of Carlow were, from my evidence, growing oats at nearer 1,400 feet.
Corlett also regretted the fragmentation of knowledge into non-overlapping magisteria. Botanists do plants and historians do manuscripts and rent-rolls and historical geographers do old maps. Arm-chair historians can write the papers and draw their conclusions without leaving the library!
The extraordinary things about the human eye is its scalability: we can focus on the moon or the stamens of a Tormentil. And in real time, in the real wet grass we can flick between one view and the other. Unless your knees are wet you only get a slice of the landscape - thin, insubstantial, almost meaningless. Louis Agassiz, Swiss-Harvard geologist and biologist, famously spent the whole summer on his knees in his back yard; but he only inventoried the beetles, not the deep history of his lawn.
We need a more Prairyerth Deep Map view of where we happen to be standing.  PrairyErth is set in its unique topology, but that is buffeted by the weather (incl tornadoes) and overlies a characteristic geology, which determines the soil, which determines the vegetation, which determines the fauna that romped and slithered through the tall-grass before people ever arrived in Chase County. The view is so much richer because WLHM looks at these interlocking dimensions of the place through scientific as well as English-major eyes. And the people who finally appeared in this landscape were so intrinsically interesting that you need to hear their back-story and listen carefully to their folk-lore and songs. But most of all it is, like Thoreau, a celebration of the ordinary. 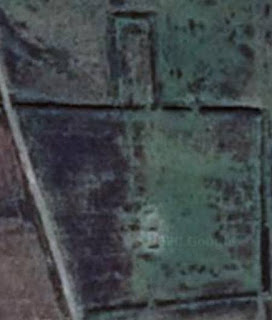 I got a little over-excited with all this cross-disciplinary talk. I started to think about besting PrairyErth's single county deep map and convening a symposium on a single hectare [such Mackey's mapped above] in the heart of the Blackstairs Hills. That would be both a metaphorical and physical "on". We'd pick a day next summer, or <covid> the one after, and bring together archaeologists, botanists, cartographers, dancers, economists, farmers, geographers, historians, illustrators, musicians, painters, poets, translators and zoologists.
Programme:
Everyone to spend the morning digging their truth out of the landscape
Lunch
Each in turn to summarise their findings in 10 minutes
Take notes, lads, two half ideas make something never before seen and imagined.
Posted by BobTheScientist at 07:35