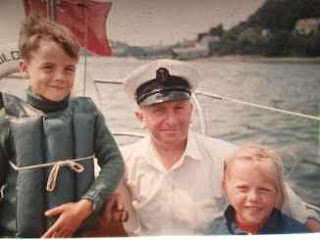 It's exactly 20 years, almost to the hour, that my father died after falling downstairs a few days earlier. This gives me the prefect excuse to reprise the most improper joke that my father shared with my twin sister and me over lunch when we were about 13.  For reasons lost in the mists of time, the three of us were in an Italian  restaurant in Whitstable.  The photo, proof that he was indeed a sea captain, is from a few years earlier. The Da must have had a couple of glasses of chianti to let his sense of propriety crumble to such an extent:

After much drink while on leave in London, two Naval Officers needing some solid sustenance find themselves in a cheap restaurant.  One of them winks at his pal, points to the ill-typed menu and says to the waitress:

“I don’t know about my friend here, but I’ll have an order of these Pissoles”.

His companion interjects: “No, No, Rodney, I think you’ll find that’s an ‘R’.”

“In that case, I’ll have an order of Arsoles, miss”

It was a strange and memorable experience to be laughing like a drain while simultaneously picking my jaw off the pink table-cloth.  The Da spent the next thirty years denying that anything remotely like that had ever happened.  Could well have been more than two glasses of chianti then; although I remember him finding the car and driving us away somewhere else after lunch - but you could do that in those distant days.

Posted by BobTheScientist at 06:15