We are all differently abled. Dullards may be kind; carpenters may know nothing about forestry; someone has to collect Matchbox cars. The top grade of scientists are expected to be able to manage the budget of a small business and act as HR for maybe a couple of dozen employees. No training is given in financial planning or empathy. This in sp♠des if/when the walking genius gathers sufficient intellectual property to float a campus company with themself as CEO. Mark my words, within a year, the company board will have a reshuffle and appoint a new CEO [strategy] and CFO [cashflow] and the boss will be sent back to the lab with a courtesy title - usually Chief Scientific Officer - and a hamper of stock options of course. All proper order: everyone [especially The Money] wins. Insofar as any talent, skill or native ability is genetic, this is a really good argument against incest. I look around my professorial friends to note how many of them have been saved from a mumbling, unkempt, off-balance existence by an exogamous marriage to someone who has complementary skills in {money-management; child-care; cooking; car maintenance; creative writing}.

Because family, we all got a copy of the 2020 Christmas Book from the QI stable. QI has produced a steady stream of income for Faber; and I daresay a trickle of royalties for The Brother. This year's book is Funny You Should Ask: your questions asked by QI elves. [Buy] I wrote about 1339 [2013] 1441 [2014] but you'll have to hunt up books 1234, 1342, 1423, 2024 yourself.  The apple falleth not far from the tree and I've been working diligently for the last 8 years publishing random stuff which is interesting me at a given moment. My style is more off with the fairies discursive, running at about 700 words the Blob. Compared to take-it-or-leave-it QI Facts like:

Which run to a microtweet of about 70 characters. The new book is a better read because each contribution is longer, and so more nuanced and, well, quite interesting. Matter of taste, really: on dit que the younger generation [where the QI fanbase resides if my students are any index] has a shorter attention span than silverbacks like me. A couple of times in the book, I have been brought up all standing [acceleration due to gravity on the sun's surface is only 20x Earth's] and had to go verify what I've just read. It's counter-intuitive but true which is a key theme in the QI experience. 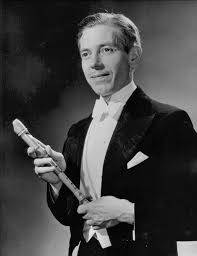 I've got something more to say about their answer to this question "Who popularised the recorder, and where can I get my hands on them?" It tinkled a distant bell and I suggest that their answer Carl "Carmina Burana" Orff [because his Schulwerk, a system for encouraging music in kids, featured the recorder] is >!shock!< the wrong Carl. The Brother and I spent one year of our formative lives living in Haslemere, Surrey - England won the World Cup that year and I became a zen master at splitting logs. The most famous thing about Haslemere is that it was home to Arnold Dolmetsch and his son Carl [R for recorder] who founded the Haslemere Festival for early music in 1925 and ran it for the next 50 years. It was like the Wexford Opera Festival with lutes and recorders: not mainstream by any means but important for an exclusive section of the the elite and their hangers-on. Carl, through the Dolmetsch Foundation, commissioned a substantial number of works for recorder, by such noted composers as Lennox Berkeley, York Bowen, Herbert Murrill, Arnold Cooke, Cyril Scott, Francis Chagrin, Hans Gál, Gordon Jacob, Nicholas Maw, Stephen Dodgson, Jean Françaix, and especially Edmund Rubbra. If you can whistle any tune by any of this notables then you really need a season ticket for the Wexford Opera Festival . . . and welcome to it.

Did someone mention recorders? Dolmetsch Père cut his teeth on restoring and building early musical instruments: lutes, claviers, harpsichords and . . . recorders [after the young shaver lost one in Waterloo Station]. But immediately after WWII he scaled up and his factory started to churn out bakelite recorders in the tens of thousands. Getting an affordable recorder into every home that had the least interest in acquiring one did more, I suggest, to roll out the tootlers across the nation and indeed across the world.

The Dolmetsch story is quite racy [molto allegro or even vivace]. Carl was dreamy [he lost that antique recorder in Waterloo Station when he was a child] and conservative and not as good a player as he believed. But, like wine-tasting, musical appreciation is fuelled on assertion and pretension. If you act like a maestro, your audience will carry you along on a wave of applause because nobody wants to sit out a standing ovation. Carl was kind of hopeless when it came to stock-taking, marketing, supplier mollification, and balancing the books. He was thus fortunate to marry Mary Ferguson, a capable, business-like and effective Scot. He also had an intense relationship with his accompanist Joseph Saxby; the two travelled to recitals all over the world together for several decades. Mary and Carl divorced in the 1960s.

Changing economic conditions led to a boardroom putsch in 1978: Carl's control of the company was wrested from his hands and Mary and a parachuted William Heaton settled the business back on the rails. Carl went off and founded a separate Dolmetsch company in the same town and both sides haemorrhaged money to their lawyers in disputes about IP, assets, & trademarks. The original company went under a few years later, much to Heaton's chagrin; and most of the assets were acquired by Carl's enterprise which was being managed largely by his son-in-law. Companies, like fashions, evolve and move on. It is rare that The Creative with the original inspiration has the capacity or interest to manage the consequences of their success.