There's been a good deal of vaporing about free-speech after The Don of Casa Blanca was finally de-listed from multiple platforms of social media. Free speech is about allow people with whom you disagree to have their say.  "I disapprove of what you say, but I will defend to the death your right to say it" (not Voltaire). Echo chamber echoes are always welcome, of course: so comforting.

Consider Jehovah's Witnesses JWs; they are a perennial edge case forcing us to reconsider our cosy certainties. They are obedient biblical literalists, who make it slightly more difficult for outsiders by having their own translation of the bible which duffers in some detail from the KJV on which I cut my scriptural teeth. They are good with vaccines but don't hold with transfusions and there have been a number of high profile cases when doctors and parents differ about what's best for sick children. The most recent Irish example was a 2006 post-partum haemorrhage case which would have orphaned the child but for a paternalistic intervention by the High Court and the Coombe Maternity Hospital.

JWs make up the majority of conscientious objectors: holding that Jesus turned the other cheek rather than took up cudgels for his beliefs and advised his disciples to follow him in that position. "Then said Jesus unto him, Put up again thy sword into his place: for all they that take the sword shall perish with the sword." Matt26v52. For JWs, the only battle worth fighting is Armageddon . . . on the side of the righteous, naturally. The extent to which The Man can accommodate conscience is a measure of the civilisation of a nation - South Korea gets a 20/Oct/20 tick.

I've written about The Pledge of Allegiance before. It is really repellent to have children reciting anything in unison: that goes for prayer as much as a government mandated pledge. Children are savage enough to turn on each other without being groomed to conformity by church or state. We have innate, hormonal, neurotransmitter mediated, capacity to Other people who look or behave differently from the pack. In my teens, I hitch-hiked from Essex to Inverness via Aberdeen [read that for Other the Gays] to pick raspberries for money. After I'd accumulated enough cash, I took the bus into Inverness to spend it on scotch pies and chups. It must have been school's out because the bus was jammed with kids going home. A group of older girls at the back of the bus took exception to a cheeky comment made by a dark-haired gurrier and started a chant "If you hate Black Bandit, clap your hands" and soon everyone under the age of 12 piled in with hands and stamping feet. It didn't turn ugly, and the chap didn't seem too put out, but it was notable how quickly the Us v Them lines were established. 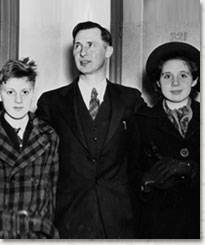 In 1935, a chap called Billy Gobitas [L with his Dad and Lillian] from Minersville Pennsylvania, a Jehovah's Witness, and his older sister Lillian, refused to engage with The Pledge which their church considered an example of idolatry. Those were the days when the Pledge was recited with right arm outstretched like a Hitlerjugend rally across the water. In Germany also, JWs had refused to salute the Führer and 10,000 of them were bundled up into concentration camps by the State. The local school board got all officious and banned the kids from public school. The case worked its way up to the US Supreme Court where, in 1940, the case was decided 8-1 in favour of Das Reich the State of Pennsylvania. Justice Frankfurter wrote the majority opinion holding "national unity is the basis of national security . . . The flag is the symbol of our national unity" & dissent was a threat to that security. The minority report was written by Harlan Stone "History teaches us that there have been but few infringements of personal liberty by the state which have not been justified, as they are here, in the name of righteousness and the public good, and few which have not been directed, as they are now, at politically helpless minorities." In other words it is all too easy for The State to bully the dispossessed into a facade of conformity to allow their continued exploitation by the powerful.

The consequence of this decision was to unleash a pogrom against JWs across the nation from Texas to Maine. Reading between the lines, Lillian seems to have been a bit of a pest: an A student who persistently knocked on the doors of her Catholic neighbours trying to convert them. But making her drink castor oil [Richwood, WV we're looking at you] or burning down the local JW Meeting house [we see you, Kennebunk ME] is a disproportionate response.

You won't find Minersville v Gobitas in the annals of SCOTUS decisions because a SC clerk typoed the family name to Gobitis [possibly a Freudian slip because dissenters seemed like a disease]. At least some of the SCJs had second thoughts when they read about the violent consequences of their decision. Recusing children from Pledging conformity to the Flag was allowed after West Virginia State Board of Education v. Barnette (1943). If you ask me, the only thing Pledge [R] is good for is to get a good shine on your dining room table and bees-wax is a better eco-solution to that problem.
Posted by BobTheScientist at 07:14