One of the themes / obsessions in The Blob is Islands: I made a list which is occasionally augmented. I have also been on an eponyms jag; and these two concepts came together in Bob Island down Antarctica way. I've also been following, largely off-Blob, a tuthree youtube channels to do with boat-building [TallyHo] and water vagabonds [Uma]. Youknow how Youtube throws shite at you, because algorithm? I find it wearing and borrring to be caught in an echo-chamber delivered by dirky software engineers in San Bruno, California. Jakers, I want different, not same old same old. Occasionally, however, something pops up in front of me on the couch which briefly deceives me into firing up the grey matter. Deception Island by bark, for example, sent me down a sealer, whaler, cruiser rabbit-hole about a place I knew nothing although it's not a million miles from Bob Island [260 km more or less]. It's here and was mapped in 1828 by Lt Kendall: 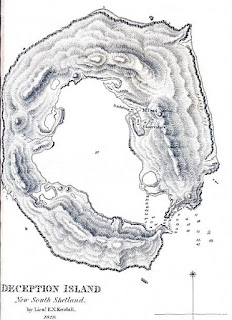 At the beginning of the 19thC and again at the beginning of the 20thC, Deception Island was a Wild West place where fortunes were made and human lives were lost. The 19thC event lasted about 5 years, from the island's first discovery in 1820. It was named Deception because a substantial, never frozen, natural harbour is only accessible by a narrow, cross-windy gut between the cliffs on the SW of the island. It is never frozen because the harbour is the caldera of an active volcano and the fumeroles and leaks keeps the water warm.  Between 1820 and 1925 an estimated 500,000 seals were slaughtered. Until they became so hard to find that the sealers all went home. HMS Chanticleer, Captain Foster, passed by in 1828 and charted the island for future reference imperial designs: hence the clatters of soundings in and around the entrance to the harbour. When Chanticleer returned to England in 1831, the Admiralty intended to refit and revictual and send her out again for more exploration and surveying. The poor old skiff was knackered, however, and time was of the essence; so HMS Beagle was commissioned for the task instead. A well connected young chap called Charles Darwin landed the job of  'naturalist' and the rest [of 19thC biological theory] is his story.
Deception Island had its second fling of economic life from 1904 until 1931 when it rivalled the rather better known [Kildare's own Ernest Shackelton died and is buried there] South Georgia whaling station 1650km to the East. For several years, the whale carcasses were cherry picked for their blubber and the remains, unbeguilingly called scrots, were cast adrift in the harbour. The smell of rotting whale mixed to a heady aroma with sulphurous volcanic gasps was quite impossible to wash out of everyone's hair. The stock-market crash, decimation of whale populations and the coming on stream of geological oil shuttered the whale-killing business, at least on Deception in 1931.
The first Cruise Ship arrived in 1966 and the island has since served as Destination Cold for those who'd done the Caribbean and the Med and had "selfie with penguins" on their planet shagging bucket list.
More?
A short elegy to whale flensing based on Hans Martin Kjøniksen's 1915 diary
A history according to UK Antarctic Heritage Trust
Selfie with penguins
Posted by BobTheScientist at 07:49