What can you do?

I am really quite good at pub quizzes but I couldn't run a mile to save my life. I had to work really hard with the Curse of Knowledge to really understand how my students didn't grasp "elementary" maths and had no clue at all where their parsnip pancreas might be located. I am full of admiration for distance runners, painters [house and canvas], JCB operators and plumbers. My skill-set as an explainer, writer, rememberer has uses for the community and boosts my sense of self and self-esteem. But I, we, need a lot of complementary effectives to keep the gears of society turning. I'd be wrong to disparage people who didn't have the benefits of my very expensive education; not least when the boiler busts a gasket. I am really fortunate to a) have been born an Anglophone b) have had a mix of Gardner's multiple intelligences that was on the button for success at school. Can't dance, can cipher!

Despite concerted efforts to change the language too many of us still think about the disabled. If you're wheelchair bound, or blind, or deaf you have our commiserations and the kinder, less-hurried, more pro-active members of society will be ready to offer a helping hand. Those people mean well, but they may be "I've got this" dealing with problems that are well within the capabilities of the helpee. If you've crossed the road to the Post Office a gazillion times, ya don't need your elbow clutched by someone who is actually occluding the traffic sounds from that side of your universe. What you might need is a cheery "Hello, I see you and how's she cuttin'?". Because the rest of us are awkward at dealing with The Other and don't want to intrude in other people's space.

When my grandfather's last retina [the other was shot off in the war] dropped off in his 80s, his Freemason pals came to visit . . . until they didn't. Those fair weather friends left him in the dark for the last few years of his life because he became Less from losing his sight and was no longer such good fun. Feckers! 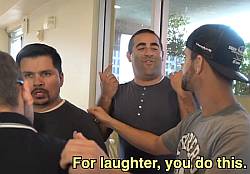 Metafilter flagged up a new language for me: ProTactile [foursome hard at it L] invented in 2007 and in development among the Deaf & DeafBlind community. If there's one thing positive [just nope] good about Coronarama it has been the coming to stardom of the World's ASL/ESL signers making things clear behind the left shoulder of politicians and especially public health leaders. Not much help if you're blind as well, eh? Here's a handful of folk riffing the ProTactile. Looks far too intimate for deeply inhibited me. And here's a report on PT from CSM. One of the MeFi comments was about the irony that this new fingery communication was trying to gain traction in a world where inappropriate touch is #MeToo hugely explosive.

One thing we know for definite about the human mind is that it is labile and flexible: if your speech centres are ablated by a stroke, your brain can recruit other lesions to the task. If you have no vision or hearing you may nevertheless have a rich sensory life: perhaps because you can compensate, concentrate on other parts of your tool-kit. Like left-handed tennis-players, I could imagine blind wine-tasters doing really well in the profession . . . until they were banned.

If you do nothing else today, you could with advantage read the [DeafBlind] poet John Lee Clark's essay on distantism. This is the imposition of our cultural norms about personal space on a sub-set of society which is much more up for tactile communication. Perhaps because language we do much less riffling through each other's fur picking out lice and skin-flakes [mmmm tasty] as a way of cementing social bonds . . . and establishing social hierarchies. Even with phatic chit-chat we are possibly missing a few tricks for mental health by keeping our fingers to ourselves so much. Clark is asking for a pass for the DeafBlind because it's all they have. He's also making an implicit plea for everyone to get a bit closer. Not now, lads, we have pandemic on. But afterwards, like, more hugs are needed.