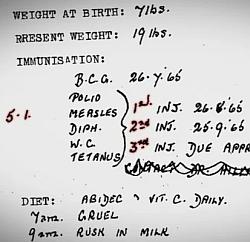 . . . guinea-pigs for tea. The Final Report of the Commission of Investigation into Mother and Baby Homes [available] is almost as long as the Brexit / EU trade agreement and cannot be approached lightly unless you have a severe case of blunted affect. The systemic issue is that the mothers and their babies were othered by those who were supposed to be caring for them: their families, the state, doctors, the church, the nuns who were running individual homes. The main-stream media won't have much stomach for reading and commenting on the details: it's much easier to get a soundbite from the redoubtable Catherine Corless and move on the the Covid numbers or the scores in the UK Premier Division. And the rest of us won't be dwelling too long on events that happened long ago and far away.

Chapter 34 deals with drug trials. The evocative care record shown L is clipped from an RTE report on the shenanigans that The State went through to service the requirements of their lords in the pharmaceutical industry. MMR didn't come on stream until 1971; W.C is whooping cough = pertussis: now usually given as DTP triple therapy.  On p.2 /58, there is a throw-away reference to the Ring College diphtheria immunization scandal. Seems that a local doctor, during a vaccination trial at a fancy fee-paying Irish College,  killed 1 girl and infected at least another 19 with TB and the blame was shifted onto The Brits in the form of Burroughs-Wellcome the supplier of the vaccine. The book which makes these allegations is Strangling Angel by Michael Dwyer [publ] but there's a convenient executive summary. The publicity, the stitch-up and issues of liability and indemnity put back the roll-out of vaccination in Ireland by at least a decade. Add that to state-sponsored nacrolepsy denialism and push back against HPV and the present government has a potential problem with vaccination up-take which they are treating with a "it will be alright on the night" optimism that I hope they will see vindicated. We've suggested an antidote.

It is cold cold comfort but the Ring-gate scandal shows that, in the past, The Man has been prepared to sacrifice comfortably middle-class children as well as the offspring of young women of sin. In mitigation, it is clear that the parents of the children in Ring were informed of the proposed vaccination and all gave their consent. I daresay that it was a long way from what we would call informed consent: where the benefits are balanced with an honest appraisal of potential adverse outcomes. And there needs to be an audit-trail "Written consent unaccompanied by other evidence that an explanation has been given, understood, and accepted, is of little value".

I hope that we are now more skeptical of Authority because The Man has been found so often with his pants down around his feet of clay. But nevertheless, mind-manipulators (advertisers, managers, bullies, cult-leaders, parents, SWM) are quite capable to framing a question [ne nonne num] in such a way as to draw out the required answer: often "Sir, Yes Sir, Sir". Ominously the three cited sources for informed consent guidance are Nuremberg Code (1947), Report of the Medical Research Council (UK) (1962) and the Declaration of Helsinki (1964). To find that first reference in the context of the current report is throwing Birkenau and Bessboro in the same circle of hell: let those responsible quibble about the details of the rankings.

I tell ya, reading Chapter 34 made me sit up to appreciate that "The past is a foreign country; they do things differently there” . . . in spades. After a couple of pages usefully documenting who was capable of giving consent for a child to be enrolled in a drugs trial [basically the unmarried mother even if she'd been sent back "home"] the commission concluded "Precisely who was the guardian is, however, largely irrelevant as no attempt seems to have been made to seek the consent of parents or guardians". Even in the 1960s, indeed even since the 1937 constitution, it was clear that the mother was legally responsible for the welfare of her child . . . but the relevant Mother Superior floated over such details in a miasma of judgmental certainty in her own sense of right.

The Past may be a foreign country but I was there, trying to vindicate The Boy's right to have two parents. For me, for us, it all worked out well; for others, less fortunate, less well-connected - not so much. Now ♩s the t♩me for your tear♪.

Catherine Connolly TD gets the report
and suggests that the leak of the report
was engineered to give The Man control
of the narrative.