Boy grows up at sea

I was a navy brat; at the age of 14 my father was sent from his home in Dunmore East to the Royal Naval College at Dartmouth. He was 22 when the war broke out and had some adventures in Motor Torpedo Boats before graduating to a more infrastructural role in bigger ships. He survived the war although a lot of his mates didn't and basically never talked about his experiences. Pat the Salt, The Beloved's father had a peculiarly parallel life. Also at the age of 14, Pat ran away to sea from his home in Cardiff. That was the Summer of 1939, which was misfortunate timing for a young chap to join the merchant marine. Unless you believe, with Pat, that "what kills not, fattens": for a young chap an exciting life is infinitely to be preferred to a long one. Three years later on 3rd August 1942, Pat's ship the Lochkatrine was torpedoed on the way to Halifax and Pat had to leave behind what few things he possessed when he landed in the lifeboat. In his later years he'd talk wistfully of a girl called Aurora who showed him a thing or two in Buenos Aires. 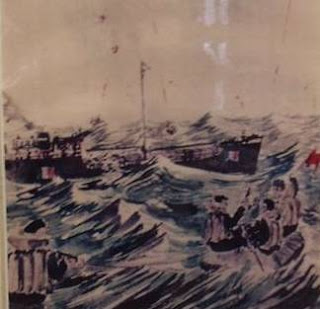 I was reflecting on these stories while I was reading a faction called The Lonely Sea and Sky by Dermot Bolger. This a remarkable story which riffle shuffles the experience on Bolger's dad who lied about his age and signed on to the Irish merchant marine during WWII and the true story of the MV Kerlough which picked up 168 ship-wrecked German sailors while returning to Ireland with a cargo of Portuguese oranges on 29th December 1943. The 14 y.o. "Jack Ryan" had a life-altering romantic experience in Lisboa. It's an interesting insight into the shocking hardships that ordinary people had to weather in the days before any sort of welfare net. 'tis a wonder there wasn't a revolution. It also reflects of honour, ethics and sacrifice: not inappropriate reflections in these our troubled times?

Here's Dermot Bolger talking about his book, Wexford, his father and his father's guardian angel.