For years, with no paper qualification, I taught Human Physiology to pharmacy technicians. They were enrolled in a two year college course mainly for the Qual at the end of it all which they could use to negotiate for better pay and conditions. Of all the modules in their course, Hum Phys was the least vocational: of obvious use in their profession and [with Chemistry?] the most challenging for those less academically inclined. At the start my only qualification for running the course was "well, I have a body" and I probably knew more about how it was constructed than anyone else in the room.

Over the years of prepping classes and fielding questions and comments from the floor, I really came to appreciate what a piece of work is a man . . . how infinite in faculties. Our core body temperature, our blood pressure, our sodium balance all maintained in quite rigid limits by hormones and neurotransmitters and molecular channels and receptors. When  I started teaching that course, I was in my late 50s, pretty fit and fully functional. As the years ticked off I was able to share how my homeostatic mechanisms were increasingly out of control: I could no longer leap from sleep and nip along to the bathroom knowing that the system would continue to pump blood to my head despite the huge change in pressure due to gravity. And what's with all the needing to pee in the middle of the night??  And is that related to the drooliness at the other end??? They deeper you dig in the mechanisms of maintenance, the more miraculous it all seems. 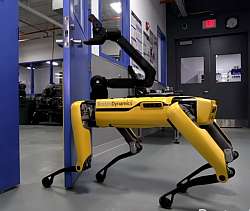 I was thinking about this last week because I watched the latest clip from Boston Dynamics about how well their robots are performing normal everyday tasks which we take for granted. It's nothing about BP, and fluid balance however; it's more sense of balance [proprioception] because the BD bots are dancing. Which requires them to stand on one foot and jump off the ground while turning 180°. You and I learned how to do these things with not a bother between the ages of 3 and 5 years. All those muscles, tendons and proprioceptors in dialogue with our inner ear to implement actions with uncanny precision: landing on our feet without falling over is not something people think about much . . . until the whole system starts to collapse into unreliability. When you can no longer stand indefinitely on one leg, you should make sure your will is written, because a fall is likely round the corner and a fall may finish you off. They have gotten to "graceful" because they have been shoved about, fallen and subject to redesign.

The dialogue at home and on Metafilter largely referenced the opening scenes of the Terminator movies: if robots can dance they can for sure pick up an Uzi and mete out death to everything that moves. For me what's remarkable and, with caveats, delightful is how much progress the dear robots have made. When I last cited Boston Dynamics in 2018, their giraffebot was opening a door [see above L: note how the creature is holding the door ajar so it can take another tug at the opening process]. Now t'buggers are shimmying their hips. But in 2015, the robots, despite looking substantively the same, were clearly a work in progress. What's really interesting is the lad leaving the golf cart at 1m08s clearly has a Parkinsonian tremor in both legs. If you don't have Parkinson's, you can stand up, sit down and lift a spoonful of soup to your mouth without getting the shakes. But that's because the counter-balance of biceps and triceps; extensor carpi and flexor digitorum; are all exquisitely fine-tuned albeit extremely active as they control both sweeping and miniscule movements of the limbs. Parkinson's causes over-reaction and over-compensation.

So I was telling Dau.I and Dau.II about this and they drew my attention to LiftLab; a feedback spoon that damps the tremors enough so that the business end of the spoon is stable enough to transfer peas from plate to mouth. Okay, in 2014 each spoon cost the bones of $300; so it's not going to be rolled out across sub-Saharan Africa. But what's not to love that Uncle Jimmy can maintain agency about feeding himself!?