I love cheese, any cheese, all cheese. I first realised this when I was 8 and my Mum had a date with the Ladies Naval Lunch Club and I had a mid-term break, so she took me along. It wasn't a lunch as such because there was no soup or dessert, but a cheese tasting. About eight different British cheeses were presented as cubes on plates and there were probably crackers as well. Up till then cheese was Cheddar, not too strong, not too white, not too challenging. The experience made me appreciate that there was a whole world of cheese out there, some so different in colour, flavour and texture that it seemed a cop-out to bin them all as 'cheese'. Don't the eskimos have 40 words for snow? [hmmmmm QI says maybe not and straightdope claims 1 < N < 40].

But it's true to say that there is a lot of crap not-very-interesting cheese out there and there is not a perfect relationship between cost and quality. Of course a lot of this is down to personal taste - I can't get excited about Halloumi χαλλούμι which the girls used to call squeaky cheese when grilled because of the sound it made when bitten. Halloumi is made from sheep Ovis aries and goat Capra hircus milk and the patties are brined. Mozzarella is in the same family but made from buffalo Bubalus bubalis milk. Cheap mozzarella is made from cow Bos taurus milk and it is usually rubbish. Why would you bother? As a baker, I often make pizza . . . from scratch . . . with flour, water, yeast, salt / tomato passata, fresh rosemary or thyme / cheese, and salami if you can find any in the fridge. It is super cheap and does need the frightening list of stablisers and E-numbers that appear in the ToC of frozen pizza. I never put mozzarella on pizza because we have a fine range of cheap and cheerful cheddars in Ireland, which cook nicely with out weeping sputum.  One of the best meals I ever had was a plate of mozzarella, fresh tomatoes, basil and bread in café at the end of a dirt road on the island of Milos Μήλος halfway between Athens and Knossos. After that cooking mozzarella seemed like murder. 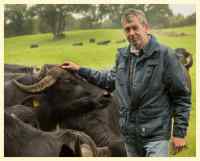 So where is the best mozzarella made? If you answer Italy you get a bzzzzt because the Gold Medal for the 2016-2017 World Cheese Awards has just be won by a family business in Cill na Martra outside Macroom on the edge of West Cork. Being one of the herd of dairy farmers is just hardship especially since milk quotas were lifted and the market has gone into free-for-all free fall. It didn't help when the Chinese limited the import of powered milk either. But there are models for adding value to your primary product and cutting out some of the middle-man. Keogh's potato chips is one example. Nobó trendy ice-cream is another.  Johnny Lynch [L with his buffaloes] was a dairy farmer milking cows until 2009, when he saw the writing on the wall for regular milk and went to Italy to buy some buffalo heifers. That was a huge plunge but the gamble has so far paid off. It didn't help when Johnny got cancer either, but that is in remission.

The heifers had calves and now there are 250 buffalo on the family farm, 80 of them being milked each day to produce 200 kg of fresh mozzarella, that will rise to 250 kg a day as the Summer flush of grass starts to drive up productivity. The milk is sent 30m away to another shed on the steading where Sean Ferry, cheese-maker extraordinary, works his magic on the raw milk. By coincidence, Dau.II went to the English Market before Easter and brought us a round of Macroom Mozz. It was Just Perfick. It rushed me back 25 years to Milos and it wasn't even sunny!

Chekkitout: artisanal mozzarella processing in Italia.
Posted by BobTheScientist at 07:28