In Taxonomy, the naming of parts in biology, there are lumpers and splitters. Lumpers prefer to keep things together in broad categories, splitters tend to elevate small differences to a taxonomically distinctive name; which gives those scientists naming rights. The field has its regulations and conventions. And it can get politically charged. Generally it is bad form to name your discoveries after yourself, but patrons love it and return the coin in further patronage. Or you can give rivals a slap, or your hero a trib.

It guess you'd call my pal Des Higgins a big lumper altogether for pointing out that whales are really artiodactyls like sheep, pigs, camels and . . . hippos. We've been on Planet Nomenclature with bears, giraffes, elephants, penguins and gnus too. In almost all cases, the revisions have been driven by the careful analysis of DNA and protein sequences obtained from individuals in the questionable species. In the old days nature-lovers like Darwin and Wallace would go into the field with a shotgun and blast away gathering specimens for their studies. Usually, they'd only keep the skin and discard the rest of the body for recycling in situ. Natural history museums are holocausts of specimens often containing dozens snd dozens of examples of the same species to document the extent of variability.

You can't do that any more, so field biologists are only licenced to get DNA non-destructively. In my days as a vole groupie, I'd often go into the field to hold the coats of the real biologists as they measured the size and abundance of Microtus pennsylvanicus. They'd obtain blood from the infra-orbital sinus by stabbing a glass capillary tube in under the eye-ball of the (securely held) rodent. That's rather invasive and I doubt if they'd get ethical approval now. But that's okay, novel techniques like PCR, means that you only need a single hair follicle to map the who genome of your specimen. With Havahart live-traps or even sticky paper in baited tubes you can get hair samples from small scurriers-about-the-forest-floor. Zebras not so much. For larger wild animals, scientists need binoculars, a shovel and a plastic bag to gather fecal samples which they have seen exiting from an identified individual. Shit-sifting can also give us a handle on what species of plant are eaten by large herbivores. 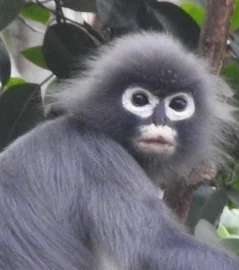 An intrepid group from the Deutsches Primatenzentrum DZP Göttingen have been out and about in the jungles of Myanmar watching for falling monkey-poop and gathering it up for analysis backing the lab. The baggies are half-full of 80% ethanol to best preserve the DNA. In DZP Göttingen they are, through the wonders of PCR, focussing in on the cells of the intestinal epithelium. But the same samples could gbe used to get a handle on the langur diet through DNA analysis of the plant fibre; or indeed on the intestinal microbiome. Loadsa PhDs over the next few years They were interested in Trachypithecus, the langurs, a Primate genus of which there are 20 recognised species, especially T. phayrei which is spread across Bangladesh, India and especially Myanmar. It has long been recognised that there are two subspecies: T. phayrei phayrei in the West and  T. phayrei shanicus in the East of the range. 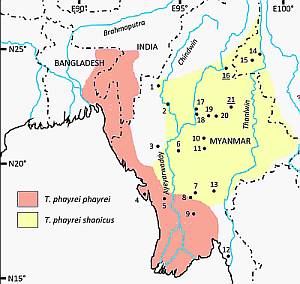 Their big finding was that there was a third group of genetically distinct langurs clinging for dear life to the slopes of Mount Popa [marked "6" on the map. The clinging is not due to rising flood-waters but the usual human-mediated insults of hunting, de-forestation, pollution, and habitat loss. It doesn't help their case that on the peak of Mount Popa is a spectacular monastery which is on too many trekkers' bucket lists. In fact all the Trachypithecus phayrei populations are endangered on the IUCN Red List. It seems best to raise the Popa Langur to its own species which more or less requires parity of esteem with its neighbours and cousins. 2020 sees two extra species of langur T. phayrei, T shanicus and now T. popa. Without those designations the people responsible for triage in the holocaust will have a better excuse to say "well, we've got Phayre's Langur covered" if any members of the clade survive. And who is responsible for these brutal decisions? Nobody! In Ireland we can't even manage a coherent cross-border public-health response to Coronarama. Imagine trying to get Myanmar and India round a table to discuss the fate of monkeys? Heck-n-jiminy that's where the Rohingya live.
Conservation? - it's a shit-show.
Posted by BobTheScientist at 07:27