We all have to be born somewhere. I was born in Dover: Buckland Hospital. If not exactly an accident, that location was driven by the fact that my mother was born there herself and could call upon some family support in the aftermath. You can defo see France from Dover, especially if you climb a ways up The White Cliffs of Vera. For this reason, Dover has been in the News this week because a lot of vehicular traffic passes through the ferry port [or alternatively catching the train at Folkestone and doing the journey underground and sous mer]. A "deal" may be announced within  an hour of this Blob. I don't know how it will turn out, but it looks like the UK has been sleep-walking towards Brexit with the Brits wanting eat their cake [cheap wine and vacations on the Costa] and have it [no to Johnny Foreigner and absolutely no to Jacques "Aiglefin" Pêcheur] too. 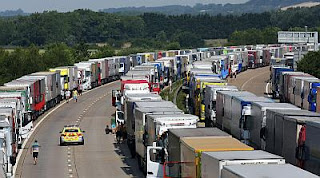 If you look carefully, you'll notice that all the 18-wheelers are facing the same way --> towards France. check out pictures of Manston aerodrome which has been taken over as a 20km linear-truck park. If trucks are parked in 20 rows across the tarmac there are certain economies of scale: you don't have to walk so far in the rain [it's December] for the jacks. The picture above is from Operation Stack or Operation Brock: cunning plans to store unmoving trucks along the edges of main roads leading to the ports. Those lads have a portaloo installed every 1 km possibly next to the emergency telephones. If you've never had to use those phones [and most of us haven't] you may not have noticed the arrows which point to the nearest emergency point. Nobody, in theory, needs to walk more than 500m for solace. As Dau.II pointed out you can't run fast when your legs are crossed.

Whatever about toilets, what about food if, for two days, you're parked in a line waiting for clearance. A number of big hearted groups led by The Sikhs and the Salvation Army are preparing and delivering hot food and sambos to the benighted drivers. Bring on the rice and dal, brother!

Over the last 4 decades Western economies have been told that only losers maintain inventory on the premises. Just-in-Time economics pushes the cost of warehousing Stuff onto suppliers and manufacturers and sets in place a whole system for delivering just enough matériel to be sold more or less immediately. Drugs are delivered to pharmacies and car-parts to garagistes on demand because the inventory would be too diverse to imagine storing it all in the back-room. Thus Eric the Car likes to get the Yaris for service just after 0800hrs, so that he can give it the once-over before making the call to Car Parts Logistics before 1100hrs to have the bits-n-bobs delivered after lunch.

All those lorries idle in Kent were taking Stuff or bringing Stuff; much of which [lettuce, baguettes, cream, fish, prawns (8 tonnes)] is "useless if delayed". It is now the job of British government ministers to lie stoutly assert that there are  no supply problems  and don't bother stock-piling because bread will be available forever. British supermarket chains are less confident and are capping the usual suspects at 3 per customer. These perennial anxiety items include: toilet paper, bread, wet-wipes, lettuce, pasta, rice, flour, eggs, soap, oranges . . .