My phone carrier Vodafone sent a message 22/Dec announcing free national and international calls and txts on Christmas Day. Way-hay you might think! But Bobby-no-pals has a very limited Venn diagram intersecting a) people in my phone book with b) people who'd entertain a call from someone who only calls at Christmas. The other aspect is that our phone coverage is so crappy that I often have to charge outdoors holding my  Nokia aloft to launch a txt.

On Christmas Day in the arvo I left my female rellies slaving in the kitchen, seized my  Nokia  and my azada.  The phone for free-calling, the azada in tribute to Paddy Looney who was happy to do drain work for his community of hill-walkers. I made contact with my Britse rellies alright, but the Merkins weren't picking up at 09:00hrs local time. It was wonderful to be up the hill on me tod. But the journey was infinitely enhanced by bringing Nan Shepherd's The Living Mountain as an audiobook. In the shade of the forest 130m higher than our yard ice lingered on the path as micro-plates suspended between the stones. With happy synchronicity, Nan was simultaneously describing a burbling winter burn that could be heard but not seen through flat translucent sheets linking the boulders of the creek. The ice had formed on the surface of pools which had subsequently drained away downhill. 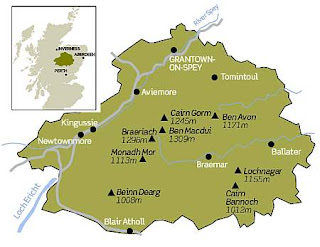 Shepherd wrote her book in WWII, describing her ventures to, across and round the Cairngorm massif which defines the central part of the Scottish Highlands. She was then in her 50s and teaching English in Aberdeen; but using every spare minute to progress her compelling love-affair with the hills. The Living Mountain is the result of decades of focussed attention on the details of what the landscape presented. She cherished the reds of birch leaves in September and ling blossom & flitting mountain ringlet in July. Nan Shepherd is on the money:

She could pause still enough, for long enough, to bring a crested tit Lophophanes cristatus close enough to breathe on and had often looked down upon golden eagles Aquila chrysaetos as they coursed the heather valleys for dinner.
And all her observations of people, birds and mammals; butterflies and beetles; shrubs and bright flowers; were recorded with judicious evocative descriptions that run arpeggios on the hum of the holistic landscape. A small taste. Our own red hill Cnoc Rua is only quantitatively different from Nan's Cairngorms: slighter but no less interesting to those who pause in their rush and chatter to really see what unfolds before their open eyes.
I have spread my cloths under your feet
Tread softly for you tread on my dreams
Posted by BobTheScientist at 07:53