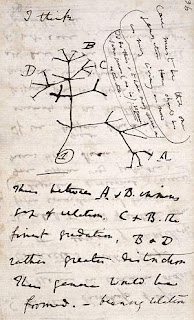 For old times' sake, I was looking for my National Carriers driver ID which I knew was in a little plastic wallet of old cards. I worked for them for a few months in late 1977. In the same place I found my Temporary Cambridge University Library card which I'd blagged for the Summer of 1980 when I should have been in Boston for my PhD. The Beloved and The Boy were in Cambridge, she working for Sinclair and I joined them there. I was privileged to be able for some book l'arnin' in the stacks of one of the top English-language libraries in the World. I don't remember being subjected to any intrusive security, but then again I wasn't going into Special Collections.

The thing is that librarians have a dilemma: they want people to access the books but they also want to protect their assets . . . so that people can access their books. Last Tuesday, the Library confessed that it had lost some assets: the "B" [for Blast it] and "C" [for Christ's sake!] notebooks that Charles Darwin filled in the months after he returned from his World cruise on HMS Beagle in 1837. Darwin was bouncing ideas around to make sense of the data which had deluged his privileged, insular, limited experience of the natural world. He spent his 23rd birthday in Bahia, Brazil "a chaos of delight" there were more butterfly species within 5km of the docks than in the whole of England. As a collector, it blew his mind and he spent the rest of the voyage pulling the pieces into some sort of order. Then, the Galapagos: each island of the archipelago hosting its own endemic species of Geospiza finches and Chelonoidis tortoises.

Darwin thought by reading and writing rather than sketching; although he was a competent recorder of what he saw down the microscope - drawing was the only practical way to record the small. His notebooks are famously scant with pictures and his hand-writing was "spikey", so it is an effort for scholars to make out his ruminations. The phylogenetic tree of relationships on p.36 of the "B" notebook [as  above L] is therefore widely disseminated as evidence, very early on, that Darwin was on a heretical transmutation-of-species jag. One of the most famous speculative conundrums of science is why it took Darwin 22 years [and the threat of being scooped by Wallace!] to actually publish his paradigm-shifting Origin of Species (24 Nov 1859).

Well >!oops!< Cambridge U Library haven't been able to put their hands on 2 of the crucial notebooks since the year 2000. In September of that year they were brought out of storage for photographing and . . . never seen again legitimately. For years the, Library's, credible but not particularly creditable, hypothesis was that the box containing the two books was "misplaced" in the filing system and sequestered away somewhere in 100km of shelving in the stacks, The current Librarian Dr Jessica Gardner has regretfully concluded that the books must have been stolen, presumably about the time of the photo-shoot 20 years ago. The police have been called but this is a cold cold case: it is a bit of an ask to expect anyone to remember where they left the books while they nipped out to buy milk for the staff rest-room. And presumably at least some of the actors are retired, if not dead.

They may turn up when an aged bibliophile passes on to the great reading room in the sky and their rellies clear out the attic. I spent a few days doing triage on my mother's paper estate over the last year or so. I don't remember seeing two maroon-covered Victorian note-books, but a lot accumulated clutter unique artifacts went to the dump.

Remember that librarian who excised and sold all those Islamic illustrations out of Dublin's Chester Beatty Library? I do. They caught him, but lost dozens of unique artifacts into rather grubby private hands.