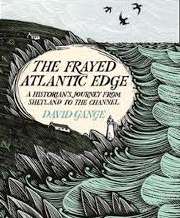 Blessings on the family librarian! A couple of years ago, she issued me with a Dublin City library card with a memorable PIN and advised me to go mad with reading material . . , including listening material to fill the 90 minutes a working day I would spend to-and-fro to work. Indeed she was more proactive than me and I'd often be surprised emails saying that such-a-book, which I had ordered was available for collection in Waterford.  I came to borrowbox too late in my commuting life [I R Retire] to really benefit from its resources of downloadable e-books. But I really enjoyed listening to EO Wilson's biographic advice in his own distinctive Alabama voice.My latest hit from borrowbox is The Frayed Atlantic Edge [colour supplement] by David Gange. His day job is Senior Lecturer in Modern History at U.Birmingham, UK, and by his account that's quite fulfilling. But some elemental part of his soul is nourished by The Wild. He's happy out sleeping on a mountain-top in midwinter; I suspect that, like John Burns, The Last Hillwalker, he'd consider cooking dinner over a smoking gorse-twig fire in a windowless bothy a bit soft; because roof. Along the way he's acquired competence in a kayak. A few years ago he was inspired to carry out a practical salt-in-yer-hair research project, very much in the same tradition as The Holistic Landscape. 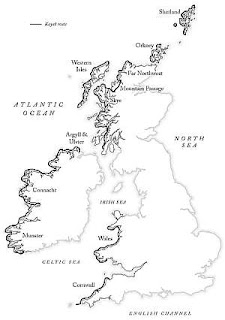 His plan was to jiggle his teaching and admin commitments in U.Brum to win himself two clear weeks every month for a year . . . and paddle his own canoe from Muckle Flugga, Shetland 62°N to Lands End, Kernow 50°N. In my most judgmental pilgrim's hat, I'd disapprove because a good part of the process of any journey is getting in the zone through unremitting deliberate practice. If you return home every fortnight for clean clothes, a dry bed, classes, cinema and mowing the lawn, then it is work to get enough of your sensibility back to talk to the seals.

This is a wonderful book, as a pilgrim and a traveller, Gange is welcomed all along The Edge. The locals extend a generous hand because strangers are guests but also because strangers bring news. He is accorded time and attention because he appears from along the whale-road which requires skill and effort that resonates empathy with communities who have lived and died by the wave. It is not the same if you rock up in your fully provisioned camper-van. Gange is a man with a mission: to refocus the lens of history to bring the sea-ways, cliffs and anchorages front and centre as they were in The Before Times. An abundance of legend and story (essential for survival on the unforgiving Atlantic Edge) preserve songlines of the seaways. A band of towering cliffs on the Ordnance Survey map is represented by an inconsequentially thin line and the sea itself is blank. From a kayak, the cliffs are a looming vertical landscape, a storm of gannets, a calliphony of cries, odd bushes, cascades of guano. From a kayak you can eyeball those seals and daydream of selkies.

Did someone mention maps? Gange pulls ashore in Roundstone by appointment with Tim "The Map" and Mairéad Robinson [covid obit April 2o2o] expecting a cup of tea and an interview about the boundary between land and sea. They suck him in, settle him down for an exchange of stories, place-names, lore and song and it's 11 hours before he looks at his marine chronometer and escapes from Tim na nÓg to continue his journey South. Much of his journey repeats that trope: arriving cold and locating the oldest extant salt in the village to share tales of Life on The Edge. He has an ear for bird cries but also an ear for poetry and cites a number of local poets including Christine Evans of Bardsey / Ynys Enlli; WS Graham of Kernow; our [obit] own Seamus Heaney.

But our intrepid voyageur goes incandescent in Mayo when he pulls out at Erris and hears the tearing cries of the Shell to Sea campaigners. The proposal to bleed profit from the offshore Corrib Oil field seems to epitomize the unholy stitch-up between big business and central government and the collateral damage that accrues to local people, local livelihoods, local culture and local ecology. The Satanic bargain may work in financial terms [or may not if naive politicians and bureaucrats are seduced, suborned or bamboozled by the consummately brutal apparatchiks of St Mammon] but only because it is "impossible" to put a dollar-value on culture and continuity: allowing these assets drop off the balance-sheet and blow away on the wind. In 2018, between Gange's visit to Rossport and the publication of his book, Shell threw in the towel and walked away from too much trouble. Win! It could have been far worse! if the people of Erris had been black and living on a different coast in the Niger River Delta. The Rossport Five would have been the Ogoni Nine hanged after a stitch-up military tribunal. The Irish Constitution is really strong on property rights but the law favours those with the deepest pockets and a centralized government can be more easily bought because there are fewer people to pay off.

An evocative revisionist tapestry of a book weaving natural history, poetry, storms and lonely sunrises into a magic carpet that carries you from the dawn of human history to the day before yesterday.

Check out The Blob's Island Index
some of which feature in Frayed.

Note: approach the talking book with caution: the pronunciation of some of the proper names will make you gasp and there are A Lot of proper names here in Scots Gaelic, Welsh, Irish and English. And the Scots and Irish accents are laughable unnecessary generic.