Threeway in the Balkans 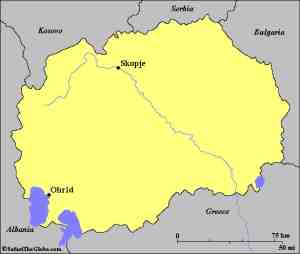 I heard about a diplomatic break-through in the Southern Balkans and had to do some research to make sense of it for you . . . and for me. Part of that was to find a map of the Republic of [Northern] Macedonia. I found one [L] which was politically etymologically neutral and was confused by the blue transnational blobs. As I was in the Balkans, it made me think of Brčko, the autonomous region in Bosnia which appears in a different colour on maps. It is different because the different ethnicities -  Bosniaks 42%; Serbs 35%; Croats 21% - were too nearly equal and too interleaved and intercalated to be able to assign to either of the constituent entities of Bosnia and Herzegovina 1) Federation of Bosnia and Herzegovina and 2) Republika Srpska.  [total aside Meanwhile in Bosnia] What could the blue blobs be? An enclave of ethnic Albanians? Displaced Bosniaks? An autonomous  district for Crimean Tartars? Then <duh!> it struck me that they might be [blue was a clue!] . . . lakes. And it was so:
Here is a zoom in of the Westernmost lakes: Lake Ohrid and Lake Prespa. 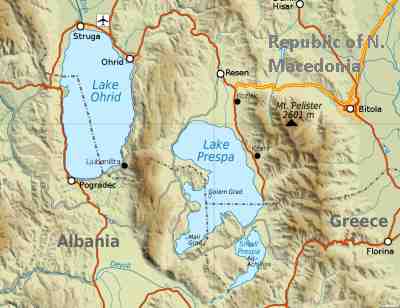 Prespa is interesting because there are actually two lakes, the smaller of which (Greek: Μικρή Πρέσπα; Albanian: Prespa e Vogël) is almost entirely within the boundaries of Western Macedonia in Greece.  The bigger body of water Big Prespa gets three different names (Albanian: Liqeni i Prespës, Greek: Μεγάλη Πρέσπα, Megáli Préspa, Macedonian: Преспанско Езеро, Prespansko Ezero) and is covered by three different authorities. I have editted the original wikicommons map to show this week's acceptable name for the country [RoNM] responsible for the  care of the Northern half of the lake. The bedrock hereabouts is a highly porous limestone karst and Lake Prespa is continually leaking down hill and underground towards Lake Ohrid to the NW. Similar geology caused the abandonment of the Cong Canal between Lough Mask and Lough Corrib in the West of Ireland. In the Summer the canal ran dry which was a bit of a handicap for the working of barges between the two lakes.

Local naturalists claim that there are as many as nine species of fish endemic [uniquely restricted] to Lake Prespa including Salmo persistericus which is genetically indistinguishable from Salmo trutta, the common brown trout. When your sense of self is all tied up in what other people call you, then biological exceptionalism will bolster your case. We should be a separate country because all the animals are different, and the plants too. A better case could be made for Spongilla prespensis a species fresh-water sponge which has been found nowhere else. Taxonomy -  the naming of biological entities - is not only a dry, idle, academic exercise. It becomes important when-and-if we decide to save species from extinction. We really don't want to devote enormous resources to saving the last few members of a 'species' which could be replaced by individuals from a different 'species' from a place on the other side of that hill.  Before we do that let's hear it for the aardvark Orycteropus afer, the only species in the mammalian order Tubulidentata. There are 1000 species of bats, slightly more rodents. Heck, there are between 180 and 350 species [depending on whether you are a lumper or splitter] of primate including us.  Aardvarks otoh have no close relatives [last common ancestor 100 mya], and are in a class Tubulidentata of their own and a precise ecological niche, and would be hard to replace if they all took sick and died next week.
Posted by BobTheScientist at 07:30