When we bought the farm 25 years ago, we paid no attention to the fact that we were to be on the edge of an SAC. We also paid no attention to the fact that, in the auction, we'd actually bought a chunk of this Special Area of Conservation dry heath that characterizes the vegetation of the red hill which gives its name to our postal address. Our share of the 24th part of the commonage came with the house. Pro rata we own more acres of hill than we have in our 6.47 hectares of in-bye fields which surround the house.

Those upland acres turned out to be an asset when The Beloved started farming from the kitchen table by applying for grants to do the right thing by current government agricultural policy but also by our druthers. REPS [Rural Environmental Protection Scheme] GLAS [Green Low-Carbon Agri-Environment Scheme but also green in Irish] and AEOS [Agri-Environment Options Scheme] followed each other as a succession of application forms. The consequent cheques paid for 500m of hedgerow, 12 acres of traditional hay meadow, a mini orchard, innumerable if currently uninhabited bee-boxes, bird-boxes and bat-boxes [trio L], and regular piles of gorse Ulex europaeus brash for small creatures to hide in. The gorse woody stems make excellent quick firing for the wood-burning stove.

The dry heath of the Blackstairs, and other uplands along the NW fringe of Europe is worth preserving because it gives elbow room to a unique assemblage of plant species and their associated vertebrate, invertebrate and microbiological hangers-on. If the heath goes through inattention, over-grazing, under-grazing or carting away in 40t trucks to access the lithium or andalusite mineral below then a handful of species and an irretrievable ecosystem will go extinct. And extinction, as we now know, is forever. The brief of the National Parks and Wildlife Service is, partly through designating SACs, to preserve Nature from the depredations of commercial expediency or ignorant collectors or quad-bikers.

But wait! Dry Heath is as much the work of human hands as it is fruit of the earth. If it wasn't for first clearing trees and the annual round of grazing by sheep, let alone occasionally burning the heather, there would be no dry heath. It is a stage in the process of succession from bog to forest artificially maintained by farmers trying to extract a living from that unprepossessing resource. All those cheques from Min Agric took account of the 7.89 ha we owned [in common] on the hill. But until recently it was an alien place: I spent far more hours beachcombing the Waterford Coast than walking through wet-bracken. A couple of years ago (and proper order), The Man announced that if we were going to claim a subsidy for farming the hill we'd have to put some sheep up there as evidence. The last 3 years, accordingly, I've spent many happy hours fossicking about the hill looking for sheep but finding moths, flowers, stone work and myself.

After a summer mapping the territory and paying attention I concluded that our uplands were more than a 3-dimensional pimple on the World. A proper appreciation of its existence and its "value" required attention from multiple disciplines including historians, archaeologists, botanists, hill-walkers, agronomists, economists, bird-watchers, poets and . . . farmers. It was, indeed, A Holistic Landscape. 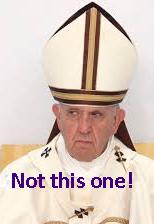 That essay is the opposite of the way governments and the education system works. There it is a territorial war: science professes to know nothing about The Arts Block. Historians and art critics are baffled by science.  Even within biology geneticists and immunologists operate as if the other discipline exists over there; which is a disastrous stance for dealing with the epidemiology of a pandemic. The Departments of Welfare, Justice and Health fight each other during the budget negotiations and are Resolute in shuffling off responsibility for drug-addicts, the homeless and the mentally ill onto the other departments. Jakers, we need some joined up thinking! Damme! I came here to talk about a notable bridge builder and I've consumed 700 words on the Intro . . . come back here tomorrow for Pontifex Maximus?
Posted by BobTheScientist at 07:39