Ros an Sidhe heard from

My pal Russ, blogger, broadcaster and author has taken his nom de blog from the place he lives: Russianside [the headland of the fairy-folk] which is part of the village of Cheekpoint [Pointe na Síge - the seamed/streaked point]. If I had grown up there, I'd have been convinced it was the very centre of the World and in a sense it was the Centre of the Sunny South East before roads became anything more than rutted cart-tracks. For here the major arteries of trade and communication, the Three Sisters [the Rivers Barrow, Suir and Nore] meet at the head of Waterford Harbour - map: 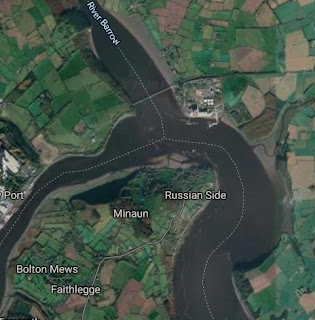 My father grew up, also messing about in boats, at the sea-end of The Harbour, as the son of the Harbourmaster of Dunmore East. In 1931, when my Da was fourteen, he left home and joined the British [and Free State / Saorstát] Navy and lived out of a kit-bag for the next 36 years. Until I was 14, I too shifted my duff every year or two as we were subject to the requirements of the service setting up home in Dover, Kingston, Keston, Norwood, Malta, Portsmouth, Plymouth and Haslemere. I don't have any sense of belonging to a particular place. Which makes me a Citizen of the World; but my life lacks that foundation being a known and acknowledged part of a community.  The consolation prize, such as it is, of being unanchored was that I laboured through a very expensive education which delivered a lonely wight who knew a lot.
Having no keepsakes in a parental attic doesn't count much as hardship or deprivation and I am full of admiration for people, like The Girl Who Invented Herself, who refuse to accept the misère hand dealt by the Norns and make their own deck of cards to play the game of life. Andrew Doherty [the bold Russ] is another such. He grew up in Cheekpoint, son of a seaman, with every expectation of making a living from the tides that swept past the end of his lane twice a day. And if he'd been born at any time between 940 AD and 1940, that would have been his, willingly accepted, fate. But a couple of decades makes a huge difference in the whizzing world we live in and Russ had barely started in the salmon trade before it was shuttered by Brussels, what he did next is chronicled in his first book of memoirs - Before the Tide Went Out.  We missed the official launch of that book because we wimped out of travelling 60km through a crashing wind-storm.
And the pandemic fritzed the launch of his most recent opus: Russ has gone back with his dipper to the Well of Memory to write another book Waterford Harbour Tides and Tales compiled from his Blog and drawing on the collective memory of his father, his mother and his whole community. You can still buy copies. It is a local history book, focusing on the past through a slightly rosy glass but it is also an investigation into the truth of Truth and how tales get cemented and given substance through repetition. Homer was only able to keep his story straight by using kennings, a steady rhythm, highly conventional epithets and frighteningly detailed descriptions. We are warned to be careful what we say on-line because it is impossible to erase an unfortunate tweet and the implication is that everything that was ever known is sitting in a repository on a server-farm next to a hydro-electric plant in Norway. Whatever the truth of that, most information is effectively buried beyond recall by the noise of other data which competes for our attention. It is nice to have a small coherent set of tales well told; on pages, bound into a book, which will out-last most of the fluff on the world's servers.
I bought a copy of Tides and Tales for Dau.I so that she could read some chunks to her maternal grandfather Pat the Salt during their weekly skype. Pat was another chap who ran away to sea at the age of 14 and had his own ghastly adventures in the merchant marine 1939-1945. I'm not sure I'd want to have those memories triggered by other stories of horizontal salt-spray, torpedoes and floating wreckage . . . and rescues! Perhaps the thought of fresh-caught fish compensates.
Posted by BobTheScientist at 07:39