eee but we do love our megafauna. The logo for the World Wildlife Fund is a giant panda Ailuropoda melanoleuca [the black&white cat-footed one] rather than a nematode worm because pandas pass for cuddly in a way that no nematode can. Although a case could be made that the nematode Baylisascaris schroederi which parasitises pandas makes as much impact on the ecosystem as the cuddly furry one. Let's hear it even louder for the microbial community of those bamboo forests upon which the whole visible habitat depends . . . indeed let's change the logo for the WWF [R].

We've been to the Serengeti before sifting Zebra shit; it is the quintessence of  ecosystem not least because there is a wide variety of fauna bigger-than-a-breadbox which makes it more sexy than Louis Agassiz's back yard in Cambridge MA. A few weeks in East Africa appeals to a certain cohort of the well-heeled travelling public. I think that, in terms of Serengeti biomass, the wildebeest Connochaetes taurinus is probably the top dog. Wildebeest is [duh!] a dutch loanword but we also call them gnu which may be borrowed from the language spoken by the !ung san [prev]. Actually, purists and pedants will point out that if the word is from the San people it is naming Connochaetes gnou the black wildebeest Gnou à queue blanc not the blue variety C. taurinus  gnou à queue noire [See map L: C. taurinus in blue, C. gnou in yellow, C. both-species in brown].The San had been driven to the margins squeezed by the Bantu coming South and the Voortrekkers coming North met on the Orange River. And the only intersect between San speakers, Anglophones and gnus occurred Cis-vaal rather than Transvaal. Did you know there were two species of gnu? I didn't: it's like African giraffes and elephants - there is more diversity than a cursory glance would make you suspect. otoh, maybe the Connochaetes genus has been over-split because the karyotype is essentially the same for both species and fertile hybrids have been obtained. Maybe the French have it, one type has a white tail the other black and that is enough to make them different species. The history of civil rights has been an action to dismiss a similar exaggeration of superficial difference in Homo sapiens - emphatically a single species. 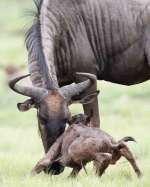 A nice consolidation of some wildebeest links on Metafilter brought on some droll commentary. One author compared 6500 dead blue wildebeest to 10 dead blue whales, which elicited a laconic "Degree of difficulty: getting the whales across the Serengeti." Seems that the restless gnus in the Serengeti and adjacent parts of East Africa go round and round on an annual migration following spells of rain which bring out a flush of grass upon which the gnu, and their attendant artiodactyls and perissodactyls feed. Millions of walking herbivores chomp through thousands of tonnes of vegetation every day. This wall of flesh pushes forward over hill and dale but pauses at rivers, especially if they are in spate or have naturally steep banks or are thronged with tourists in land-rovers hoping to get some snaps for their holiday album. At every river-crossing some gnu get snagged by crocodiles [death-porn link] or miss their footing or are elbowed off the ford by the conspecific press . . . and drown. A couple of hundred rotting gnu carcasses [pic!] are a bit poooeeee but only for a month or so as their protein is recycled. The skeletons last longer and provide slow-release phosphorus for everything downstream for many months. It is surprising how many species depend on these accidental deaths. Each death is a tragedy for the individual  but collectively they happen with sufficient regularity that they can be banked on.  Not just the crocs and the fish, but the hyaenas Crocuta crocuta and hunting dogs Lycaon pictus which haul joints out of the river where what's left nourishes the trees and bushes. And of course the buzzillion flies lay eggs and the maggots feed the birds and the cycle of death goes round. More glossy and more data at Atlantic.
Posted by BobTheScientist at 06:35