There is an interlude in Shagsper's Hamlet, when the Prince of Denmark unmercifully rags a sycophantic courtier by forcing him to agree with every daft statement made by the head of state:
Enter POLONIUS
HAMLET God bless you, sir!
LORD POLONIUS My lord, the queen would speak with you, and presently.
HAMLET Do you see yonder cloud that's almost in shape of a camel?
LORD POLONIUS By the mass, and 'tis like a camel, indeed.
HAMLET Methinks it is like a weasel.
LORD POLONIUS It is backed like a weasel.
HAMLET Or like a whale?
LORD POLONIUS Very like a whale.

If you're in the 'Shaxpere was a bloomin' genius' school, you'll infer that the Bard knew more about the genetic inter-relationships of these disparate mammals than anyone up to 1994.  Except for the weasel!  That puts a spanner in this Arts/Science hypothesis because it is only the camel and the whale that have a close genetic similarity. Indeed Professor Tonks from Maritime Whoowah University has suggested "weasel" is an First Folio typo for "Sei Whale" Balaenoptera borealis.  In 1994, Dan Graur and Des Higgins published an extraordinary paper mustering the molecular genetic evidence that first pointed at this relationship.  Genbank the DNA database was established in 1982 with less than 600 sequences. By late 1993, there were 150,000 sequences available for study . . . but even then very much under-analysed. Now there are 250 million sequences and we are drowning in data for which there aren't enough effectives on the planet to properly analyse.  Dan and Des decided to gallop across the 1994 data-prairie whoopin' and hollerin' to gather themselves some sequences with which to answer an interesting evolutionary conundrum: where did whales come from?  They downloaded the sequences of a number of proteins including beta-haemoglobin, crystallin-alpha-A and insulin and some transfer-RNA genes from a selection of whales and a selection of artiodactyls - the mammalian order that includes cows, sheep, deer, antelopes, pigs, camels and llamas.  Actually, given that the N=150,000 database was diluted by sequences from bacteria, worms, flies and California condors, they didn't have much choice and their panel of sequences was limited to what was available.

When the sequences were aligned and a tree of relationships was constructed, they were gob-smacked and excited to see that whales were closer to cows and sheep than either of those species were to pigs. They put their arguments in good order with text, tables and figures and sent it off to Nature, Europe's premier general science journal. An editor at the journal looked at the title and sent it off to a whale taxonomist to be refereed.  A scathing review came back.  I paraphrase: "these authors have disappeared up their own backsides with their clever-clogs tinkering around with such irrelevancies as DNA sequences. A child of six knows that artiodactyls have cloven hooves and many of them pronk about in the Serengeti; on the other hand whales have fins and live in the ocean.  Please don't waste my time like this ever again."  D&D read this critique, realised that whale-mavens looked at the world through baleen blinkers and later that year the paper was published in MBE Molecular Biology and Evolution.  It didn't quite sink without trace like a dead whale but it didn't make enormous waves either. Des Higgins has achieved mega-fame for writing the nifty software that enabled him and Graur to align their sequences and getting cited for this more than anyone else in Irish science. Dan Graur OTOH wrote The Textbook for the field which is still in print and available for a king's ransom [$75] and holding its price well in the 2nd hand market. But I think their Origin of Whales story is better value. 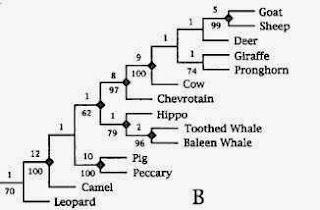 Two years later, more data had come on stream [Genbank's size then N=850,000 sequences] including a number of casein milk-proteins.  A group led by Peter Arctander constructed a phylogenetic tree [L based on beta caseins] for about 20 mammals including a couple of whales and such artiodactyls as sheep, cow, camel, deer, pronghorn, pig . . . and hippo. >!kaCHING!< and, like, duh!  The far-fetched story told by Graur and Higgins that whales were a sort of cow now made intuitive sense.  In 1963, Ted Hughes wrote a Kiplingesque Just So Story called "How the Whale Became" Higgins and Graur and their tidy-up-afters had an answer 30 years later. Once there was a hippo . . .
Posted by BobTheScientist at 07:08