As my ambition genes were shot off in the war, I was never very successful in science. If I'd cared more about getting ahead, I'd have been better at the hard work of publishing papers and might thereby have gotten tenure at Harvard Little Rock. I applied there immediately after my PhD - not short-listed! But I did have a lurching mostly on-track career in science for 50 years. I was much better at infrastructure than the cutting edge: filling in the pieces behind pioneers to firm up the foundations for the next Great Leap Forward.  In the 1990s I was the Director-and-Sole-Employee of The Irish National Centre for BioInformatics INCBI which made me the Irish node for EMBnet, an EU-funded quango of bioinformatic support centres. The vision for such infrastructural support of Ireland's bioscience revolution was there but the money wasn't. As the cash dribbled away with the century, I was partway along a cunning plan to get a suit and a carry-on bag and sell seats for eBioinformatics, a commercial platform of getting access to the software and databases for cracking the code of the human and other genomes. Tim Littlejohn, the Australian founder and CSO, was preparing to appoint me sales-and-support Europe. It never happened: eBioinformatics didn't grow fast enough for sufficient Venture Capital to be interested and a handful of  Tim-and-my colleagues in EMBnet developed a clunkier but sufficiently effective free platform called EMBOSS which took the wind out of the sails of any commercial venture. 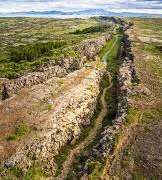 At about the same time another wannabee Merchant Venturer called Kári Stefánsson jumped ship from actual Tenure at Harvard and returned to Iceland [L þinnvellir rift valley] to investigate the genetic basis of MS. He founded a company called deCODE with a business model to sequence the DNA of everyone in Iceland and cross-reference the genetic variants against their disease status. That way, deCODE might be able to identify the key genes for MS predisposition and start to develop effective therapies against the degenerative disease. And while you're about it why not cover other line-items on the medical charts: cardiovascular, diabetes, stroke, cancer . . . I had a brief fantasy about leaving Ireland and whoring myself out in Reykjavik but nothing came of that . . . because ambition genes and because we'd just bought a fantasy farm and the fairies had delivered two infant girls to look after the hens.

deCODE was in the Covid News last week because, for a small country, Iceland has delivered Big Data. There are 50% more people in County Cork than in Iceland. At the beginning of the pandemic Stefánsson offered the facilities at deCODE to the Icelandic Directorate of Health after the equipment started to melt-down at te labs in Landspitali — The National University Hospital of Iceland. deCODE, as a big science genomic centre, has a lot of capacity and the DoH picked up the tab for anyone with the least hint of covid to get tested and resulted within 30 hours. So about half the population got tested; those who were positive were monitored by public health so we have a bunch of outcomes that should be (with caution) translatable to wherever you live.

Tourism supports the economy in Iceland and tourists are being allowed back to visit the place where the Atlantic is spreading its plates [whc prev]. After an outbreak blip traced to two scofflaw tourists, stricter control measures are now required: a) either self-quarantine for 14 days on arrival or b) do two screening tests: one on arrival + one  five days later. 20% of people negative in the first round tested positive on second go! These tourists are pretty hot with the Covid. Which only says that the prevalence is high among the demographic which travels.
Posted by BobTheScientist at 07:42