Our girls educated themselves at home and left just before they became eligible to vote. After Dau.I left home and country her younger sister was home alone for nearly two years before she, in turn, made tracks. In retrospect a large part of those years was taken up sitting on the sofa watching boxed sets [Desperate Housewives; House; Masterchef] dreadful stuff if you tend the least bit towards judgmental. Two positive notes: a) this binge-watching was in the centre of the family space rather than up in her room b) it was eclectic - didn't seem to matter what she watched or with whom so long as she didn't have to run around in the cold rounding up sheep. 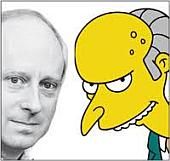 That's how we got to watch all 20 episodes of Harvard professor Michael Sandel's [L,L; Mr Burns, Homer Simpson's devious and ethically-challenged boss L,R] freshman Philosophy Course. Sandel is quite dismissive of Utilitarianism - probably because he's smarter than me - and thinks that there is something to be said for <me: aaaaargh!> Kant. But he is also a great rhetorician and could persuade most normal people to his way of thinking if they were the least bit open to change. His course is heavily over-subscribed year after year and is a prime example of the quality of the education students have the opportunity to embrace if they can overcome the 1 : 20 odds by successfully applying to Harvard.

I wasn't averse to watching Sandel talking for 10 minutes about The Tyranny of Merit. Like Utilitarianism, Meritocracy looks okay at first glance: if everyone has the same chance in life's tests, then the winners can bask in their success while the losers have only their lack of application or native talent to blame. Except, despite the rhetoric, you don't have the same equality of opportunity as I did with my expensive education. In Ivy League America, families from the top $1% contribute more students than the bottom $50% - and that discrepancy is a) self-perpetuating b) "corrosive of the common good". Academic success breeds hubris in the winners who make invisible the role of fortune [both sen$es!] in their ad astra ambitions. A sense of humiliation is to be expected of the hordes milling outside the Groves of Academe. And justifiable anger if they have heaped debt on their shoulders to meet the eye-blinking costs of 21stC higher education.

Sandel wants to stop "college, the best you can buy" being the only arbiter of opportunity. Where opportunity is defined by loadsa cash and the stuff which goes with it. College is not the only avenue for money and accolades: sports and entertainment are other channels for achieving millions and an early retirement. But heck-it your odds in those games are far, far longer than getting into Harvard. And another thing: it's not only about the money [even under today's corrupted values] it is also about recognition that, whatever your métier, your labour contributes positively to the common good. If you look down on your child-minder, your plumber, your garbage-collector you have only yourself to blame when the revolution comes.

The next day, I started in on All Things Shining: reading the Western classics to find meaning in a secular age by philosophers Hubert Dreyfus [ UC Berkeley] and Sean Kelly [Harvard]. Philosophy, insofar as it has any utility, seeks to understand the meaning of A Good Life and maybe sketch us a road map towards that desirable goal. My pal P sent me the book, for which much thanks, from Boston by UnAmazon.

There's an intriguing chapter there on trying to figure out what Homer meant by Ἀρετή areté = excellence, virtue. Robert "ZAMM" Pirsig [prev] travelled that same road on his motorcycle. Homer was writing reciting 2,800 years ago and in many significant ways that past is a foreign country. William "Home Rule" Gladstone was so weirded out by Homers kennings [wine-dark sea etc.] that he seriously suggested ancient Greeks might have been colour-blind! Here's Dreyfus and Kelly "Excellence in the Greek sense involves neither the Christian notion of humility nor the Roman ideal of stoic adherence to one's duty. Instead, excellence in the Homeric world depends crucially on one's sense of wonder and gratitude" Note the wine dark text! " . . . the basic Homeric sense of the sacred: that it is the highest form of human excellence to recognise, be amazed by, and be grateful for whatever it is that draws you to act at your best". Plumbers, student nurses, Martin "Ich kann nicht anders" Luther - we see you!