"Ce n'est pas génie, ni gloire, ni amour qui reflète
la grandeur de l'âme humaine; c'est bonté."
Henri-Dominique Lacordaire
I was writing recently about how recorded history winnows with such extreme vigour that only some of the corn is saved. Even in the current era when 'everything' is available on the internet, it can be hard to find what you want about things that are not tied down. Mountains and islands are all captured on Google Earth as are the scores for soccer matches in La Liga and anything reported in most newspapers over the last, say, 15 years. Celebrities - soccer players; pop stars; mass murderers and minor royalty - are also easy to track down. They have a wikipedia entry and that snap-shot of their lives is re-churned across the blogosphere. For unceleb people you have to fall back on the skills which my mentor employed as a researcher for the New England Historical and Genealogical Society NEHGS: paper ledgers at the Registry of Births, Marriages and Deaths and trunks of papers in somebody's attic. Some of these records are getting digitised: after a fruitless afternoon peering at headstones in a Manchester cemetery a few years ago, we were able to track down The Beloved's grandfather's grave on-line. 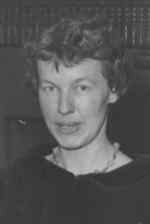 When I was young and wet behind the ears, we [me, The Beloved, The Boy, His Diaper Bucket, The Beloved's Brother, His Guitar] went on a road trip from Dublin to Siracusa, Sicily in a blue Citroen Dyane with two holes in the roof. The bucket caught the drips in a downpour near Turin. We were headed for, and I was due to speak at, The 1st International Conference of Cat Population Genetics and Ecology. Sicily was hot but drip-free and the conference was a success. On the way back North, we detoured to Utrecht. The contributors at the conference published most of their research in either Journal of Heredity or Genetica. The editor of Genetica was a cytologist called Janny van Brink [R, younger than when I knew her] and she worked in was the Genetics Department at Universiteit Utrecht.  I left TB and tb in the car [The Brother had parted company in the Alps) and went up to the Genetics Department.  They - van Brink, her post-doc and the post-doc's wife - were just sitting to afternoon coffee and. natuurlijk, offered me a cup.

I had a proposal: having knocked off the population genetic variation of the cats Felis catus of Ireland, I was now ready to carry out a similar analysis of the cats of the Netherlands . . . and did they know of any pot of money I might tap into to service this venture? Even in 1978, that was a stupendously naive suggestion. van Brink said she didn't think there was any such fund but why didn't I come to dinner that night and we might discuss it further. When I mentioned that I had two dependents downstairs in the car-park she, natuurlijk, told me to bring them too and told me what time we were expected. We ended up spending a week in her home before we found a well-serviced campsite in the forest nearby. Even after a flurry of calls the following day, there was no immediate money for genetical field work, so I applied for, and got, a job in a factory making plastic herring-barrels. The other reason we had washed up in Netherlands was that they had a Hfl.10/hr minimum wage.  I was due to start work in the factory the following Monday but more phone calls from van Brink had revealed that Diergaard Blijdorp in Rotterdam needed a grunt extra pair of hands for the World's Largest Aquarium Exposition. One of her ex-students was on the management at the zoo.

I signed on in Blijdorp the following Monday instead and spent the next seven months feeding fish, pushing a broom and sifting crocodile shit for money.  I would never have been able to afford the fees for graduate school if Janny van Brink hadn't adopted me and my caravanserai.

But it's not [except insofar as it's my Blob] about me me me. Janny van Brink's PhD research was in the field of cytogenetics and she was the first person (1959) to get a reliable count of the chromosomes for the echidna = spiny ant-eater = Zaglossus bruijnii. Echidnas are important because they are one of the few species of monotreme - egg-laying - mammals that we have on the planet: there are 3 or 4 different species of echidna and Ornithorhynchus anatinus the duck-billed platypus. The sex-chromosomes are peculiar in monotremes because they don't just have XX vs XY [with pathological variants like XYY and XXY]. Nope: monotremes have their X & Y chromosomes split into a number of different chunks.  The sex-chromosomes of birds show that this method of determining sex has evolved at least twice independently. Birds are ZZ or ZW with males being the homogametic ZZ sex and females ZW.  It is a wonderful example of good-enough evolution: either way ensures that the sex-ratio is about equal but neither is better than the other: both work.

van Brink went on to specialise in studying variation, especially of the chromosomes, of damselflies and dragonflies Onodata [See R for Microgomphus jannyae]. An indication of the respect in which she was held by her colleagues lies in her having five (5!) species named after her:
If you see these recorded as Cordulegas vanbrinki etc. you can point out these these coinages are wrong showing no knowledge of Latin grammar, tsk! So bonnets off to Janny van Brink, committed to science, intrinsically kind and can-do-no-other generous. 5th May 1923 - 28 Mar 1993

More women in science.
Posted by BobTheScientist at 06:27