A few previously separate blobbo-threads com together here. I've just started teaching my Human Physiology course for the ?fourth? time. As before I've set the students a pre-quiz [prev with the questions] to serve as a bench mark for how little they know about the inner workings of their body. Then at exam time next year, they'll feel that they've learned something. One of the questions asks how many cervical vertebrae are possessed by mice, men and giraffes. The answer, usually surprising, is that all three species have 7 cervical vertebrae, along with all but three of the 5,000+ species of mammal. It's surprising because giraffes have such exceptionally long necks. Their cervical vertebrae [see N=5 R above] must each be about a foot long! And, while we're on about necks, you might want to review Churchill's bravado "Some chicken . . . some neck" reponse to Pétain's assessment of Britain's predicament in 1940.

The problem is that. by concentrating on the tree-trunk-like most obvious feature, we've been missing a forest of evolutionary detail. It turns out that, like rhinos and elephants, not all parti-coloured long-necked African ungulates (giraffes are artiodactyls like sheep, cattle, whales, pigs, llamas and hippos) are the same species. A study in 2009 suggested that there were 6 good species and one published this year shows DNA evidence that there are at least 4.  What is a species? Ernst Mayr usefully defined them thus "species are groups of interbreeding natural populations that are reproductively isolated from other such groups." which is known as the biological species concept. Successful breeding requires that the other party looks right, behaves 'normally', smells right and is of the opposite sex. Mating isn't enough, no matter how much the vicar's dog humps your leg, no viable offspring will result. It also requires that the chromosomes from the two parents match as to number and shape and the information contained therein. If the developmental instructions are toooo disparate (are we going to have claws or hooves at the end of each leg?) that the fetus won't make it to term.  The exceptions prove the rule: famously, horses Equus caballus and donkeys Equus africanus asinus can produce viable, and useful, offspring called mules, but these creatures are almost invariably sterile. The two species have a slightly different chromosome count and these have difficulty lining up during meiotic cell division to produce egg and sperm.

It's not always easy, convenient or convincing to determine if two individuals are in the same species or not by seeing if they produce fertile offspring as a result of their coupling.  If they don't, it might be because they don't like being watched or they need to peculiar herb to come into estrus. In any case it takes a long time. Large mammals have long pregnancies: African elephant 22 months, Giraffe 14 months and it will be several to many years before the offspring can prove it has The Goods. Sequencing the DNA is, by contrast quick and cheap . . . and serves as a good proxy for compatability of the gametes - sperm and egg.

What the group from Goethe U and the Senckenberg Biodiversity and Climate Research Centre both in Frankfurt am Main and several other institutions did was sequence chunks of DNA from nearly 200 different giraffes representing all the known, named, populations of the species. Taxonomers - the namers of parts of the natural world fall broadly into two classes - lumpers and splitters. The former are conservatives and prefer to deal with and name larger groupings of similar things; splitters like to recognise small-small variants as essentially different.  In the 19thC and much of the 20thC this was largely a matter of custom, training and predilection - opinion, really. With sequencing you can get data which is largely objective and come up with quite surprising conclusions - notably that whales are really close to cows and sheep - and hippos!! - despite having no hooves. 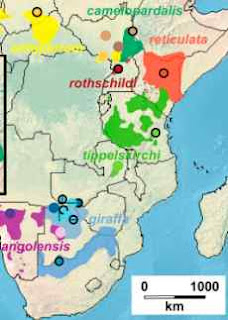 The giraffe sequencers have taken a position at a half-way house: convinced that there is more than a single species but not going as far as elevating at least eight named sub-species to full species (and therefore by definition not inter-fertile with other giraffes). On the basis of a shed-load of sequence data, a fast computer and focussed multi-variate statistical analysis they have identified four 'clades' which are probably descendants of a single population and which have diverged sufficiently to fail the mutually inter-fertile test:
You can see how they have fanned out across the continent. You can also see that the authors have gone mad with the colour scheme, so that I cannot read the yellow label attached to the yellow blobs in the NW of the range. It is G. antiquorum and G. peralta is off -map further NW wings where Niger, Burkina Faso, Benin and Nigeria meet.

One of the reasons why we can't wait to see if large wild animals can actually breed in the wild, is that large wild animals are threatened by poaching and habitat destruction and may be extinct before the first generation is ready to make a second. It would be an error if one of these subtly distinct organisms was allowed to fall of the brink because it was considered essentially the same as other giraffes in a different part of the continent. Extinction is forever!
Posted by BobTheScientist at 06:45