I don't think I want to live in a Marxist paradise where everything is rationed and everyone gets the same amount of money, eggs, bicycle inner-tubes, garden forks and guitar strings regardless of what, or how much, work they do. Flat fairness isn't really fair. Youngsters need more money than grey-beards: courting costs so much, and it's better to have fun while you still have knees that can dance and a head that can hold its liquor. Call me a Protestant but I can see why it might be A Good Thing if a material benefit accrues to people who work harder . . . or who are more thrifty: in The Before Times, Dau.II could pay the rent and put food on the table if she worked 3 days a week and she couldn't see the point in working more to spend each weekend recovering from the exhaustion of working 9 hour days on her feet in the English Market.

But I certain-surely don't like living in the current economic model where the CEO earns 100x what the effectives on the shop-floor take home [up from 20x differential in 1965!]. Where the cost of a pair of shoes might be half what the maker of the shoes earns in a year. Where nobs in Dublin 4 live in homes that costs more than a Lotto win and where homeless people buy Lotto tickets because there is no other way to light the tunnel. 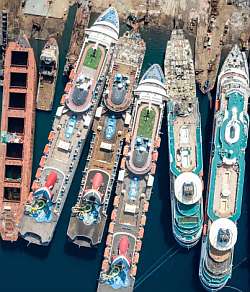 I've had a poke at Cruise Liners before. They charge a lot; pay the workers very little; are registered in countries that don't have good employment law; they are extravagantly wasteful of food; a disaster for the planet . . . and recently far too big to be either smugly elitist or even vaguely romantic. Here's Why are Billions of Dollars Worth of Ships Being Intentionally Destroyed? 15 minutes on the economics of the merchant marine - which nowadays is reduced to a) bulk carriers for coal, oil, wheat, bauxite, iron-ore, fertilizer b) container ships for sneakers, toasters, umbrellas, Velux windows c) cruise-liners. A big-assed cruise-liner playing host to 5,000 people will have cost $500,000,000 [that's half-a-billion] to commission but its scrap value as steel is $4,000,000. Cruise-liners are owned by companies that are in the biz to make money. They buy labour cheap and sell cabins dear. In 2019, 30 million people paid $150 billion [$5000 each] to cruise on the backs of 1.2 million workers on mostly crappy contracts. In 2020, cruise-liners became early conspicuous as incubators of aerosol transmittable viruses and the whole boondoggle was stopped in its seaways. Salt sea air is supposedly refreshing but it is also super-corrosive: the half-life of a steel wheel-barrow on the Waterford coast is about 2 years.

Cruise companies, despite the eye-watering throughput, are highly competitive and work to really tight margins. And their accountants have reported that there will be zero income but hefty maintenance costs. The managements seem to have all come up with a similar down-sizing solution. It's best for The Company to staunch the haemorrhage on maintenance and get $4 million as cash-back from a breakers beach in Turkey or Bangladesh. It's also better for the workers on the fore-shore to have continued wages despite the horrifying PPE-free working conditions. The price of steel is rocketting up because China is building roads, dams and bridges to offset the collapse in the global demand for sneakers and toasters.

For the math of equity it is interesting that $4 million is about the price tag on Castle Knob, Aylesbury Road, D4 in the heart of Ireland's embassy belt. [Holistic thinking alert] What about Hijacking paying Carnival Cruises $10m for the MV Global Duchess Dowager on its final journey from the Caribbean to Shiyyp Büstiç, Turkey? We could park the old lady in Cork Harbour and provide 2,000 en suite rooms for students if the WiFi could be sorted. If the students pay half the rent as they're getting gouged in "student accommodation" then the venture would pay for itself in 6 months even at 50% occupancy. As a planet, we can't keep on building things and throwing them away.

Seemingly, the megaCruiseLiners which haven't been scrapped are back in business. With new protocols about occupancy, health-costs, miscegenation dining with strangers, and off-shore freedoms. Here's a summary of the changes from a believer [10 mins]. A less positive take from Alex Belfield, the relentlessly negative sourpuss [2 mins].