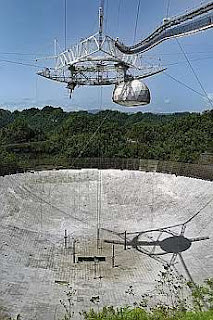 The Arecibo radio telescope, completed in 1963, had been a-round for almost as long as I have.  1963 was peak tech cold war and the US military industrial complex was concerned about Soviet ICBMs Inter-Continental Ballistic Missiles raining down on them from space. Creative counter-measures were required and one thread of that research was using intense radio-waves to destroy the incommming before it reached Chicago or St. Louis. ICBMs with war-heads are expensive and it was assumed that decoys would rain down as well in an attempt to dilute the defensive response. Subtle instrumentation was required to differentiate real from charlatan and the Feds needed a lot more basic information about the ionosphere and its radio-signals. There would never have been the money for such basic research, but cast in a "defense" framing, science could ask for a lot.

Q. Why Puerto Rico? why Arecibo?
A. Because geology.
The hills there are karst country, like the Burren in Co Clare and there are numerous roughly circular sink-holes of whatever size required. If you want to have a large parabolic reflector it helps if the rim is already in place: saves on construction costs. Telescopes are designed to focus a large area of parallel electro-magnetic waves (light or radio, both) onto a spot where where this concentrated signal may be analyzed. This receiving gizmo is suspended by wires from three pylons outside the rim of the reflecting dish and these pylons are themselves held upright by supporting stays. Like the masts of an old clipper ship the cables have to support tensive forces from all directions: not only to support the 900 tonne mass of the receiving structure but also to deal with the hurricanes which regularly rip through Puerto Rico for a shortcut.

When one of the receiver support-cables went sproinng on the 10th August, it caused a stir in the astronomical community [10 mins]. Whatever damage caused by the fall of a 10cm thick steel cable, the loss of one part of the mutually supportive web of steel is going to have knock-on consequences. It's like me and my bike wheel. After 20,000km of hard-riding along Dublin's poorly maintained roads, my much cherished commuting road-bike broke a spoke. Take a look at your bicycle wheel: it is true because the spokes carry tension alternately to the left and right side of the hub. That's a lot of tension: 75kg of me travelling at 15km/h meeting the edge of an immovable pot-hole is a lot of joules or watts or whatevs. I was in the frame back then to fix what I could, so I bought a new spoke, threaded it in place, trued the wheel and was back in business . . . but within a week another spoke had gone badong. My pal Pepe, smarter than me a bag a ferrets, said "buy a new wheel, my friend"; so I did, and I got another 20,000km out of my road-bike before it was turned into a pretzel in a RTA, I was 'arder, the impact only broke three (small! it's only a scratch) bones.

Sho' 'nuff, a second cable failed on 7th November and that threw the whole complex into a terminal asymmetry. The web of cables supporting the pylons were obverved to be parting at the rate of one or two each day while the telescopes owners developed a safe deconstruction plan and on 1st December the top of one pylon sheared off and the whole receiver crashed in to the dish below. RIP Arecibo.

As we're in Puerto Rico, let's look at the Arecibo Message which has, since 1974, been winging through interstellar space towards M13 - the Great Globular Cluster in Hercules - a clatter of nearly 1 million stars some of which will have planets [for sure] and some of which might support life as we know it [unlikely]. Check out the Drake equation. It's not likely that any of these planets will be among the ~36 [range 4-200] Out There which are guessed to have intelligent radio-aware life ./ . . when the signal arrives in 25,000 years time, The message is a string of 1679 bits [1/0] clearly chosen because that number is the product of 2 primes 23 x 73. The hope is that the radio-aware inhabitants of planet M13-102866c will twig that they must slice the incommming stream into 73 23 bit lines and get the picture shown L. Have a look: you are radio-aware what do you make of the message? It has been false coloured for you to highlight the different sorts of information. Answer.