When I was in primary school in the 1960s, we spent a good part of our off-time running around with our wings arms outstretched going neeeowww neeeOWWWW budda!-budda!-budda! in 2-dimensional fully terrestrial dog-fights with each other. We also voraciously consumed "trash-mags" of soldierly adventures in which the German soldiers cried Donner und Blitzen when they were surprised by the ever-victorious Tommies. Less time had elapsed since the end of WWII than we have lived since Y2K and 9/11. I'm sure my parents, who had both been actively in uniform during the conflict and never talked about it, wished we would all shut TFU. When not having aerial fantasies, we were furiously driving sports cars as Stirling Moss who was at the time the fastest Brit on four wheels. I don't suppose anyone much younger than me gets a rush from uttering the name, but I imagine than most boys will have a frisson from subsequent stars of Formula One racing. Indeed I'm guessing you could accurately predict a bloke's age by hitching him up to a galvanic skin response recorder and reciting: Gary Hocking 1963- Jochen Rindt 1970 - Ronnie Peterson 1978 - Gilles Villeneuve 1982 - Ayrton Senna 1994 - Fritz Glatz 2002. In contrast to those younger men [who died in harness], Stirling Moss lived on until April this year.

Making a cult of Formula One racing, as the modern day equivalent of Byzantine chariot racing, is surely responsible for a chunk of road accidents, some fatal, every year; as young chaps, in emulation, push the envelope of their immortality. Renault and Honda, for example,which make bumbly boxy saloon cars for ordinary motorists, have kept one foot on the gas of F1 because sexy speed sells.

I watching some commentary on the recent class action suit about early onset dementia from contact sport encephalopathy CSE and someone said "exercise is great but sport has issues" about the health benefits of leaving the sofa occasionally. There is no doubt that corporations of old white men make money from the daring antics of the younger generation: in boxing, rugger, cycling, race-cars

Formula One motor racing is driven more by tech than by drivers. In a similar way as cycling and athletics have been driven by drugs rather than training. 40ish years ago there was a bit of a civil war between the Fédération Internationale du Sport Automobile (FISA) who seemed to favour the established big-money big-sponsorship names vs the Formula One Constructors Association (FOCA) who sort of represented the Young Turks of motor racing: leaner, hungrier, more exciting.

There are handicaps in horse racing, where saddles are loaded with lead weights so that the better horses are held back and all the starters have a chance of finishing in the 1st three. And there is has been a move away from performance enhancing drugs in cycling and athletics; enforced by before and after urine tests and spot tests for banned substances at pretty much any time. In motor racing, for it to be a race, you have to set up some ground-rules and parameters or there will be not race but rather a case of Ferrari first the rest nowhere., which would be pretty boring to watch . . . and Rolex would go watch over something else. 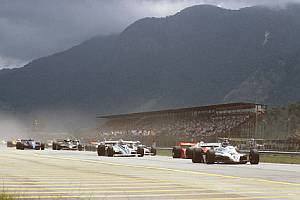 Accordingly the F1 governing  body stipulated that all entrants had to weigh at least 585kg before and after each race. On e reason might be to stop motor teams shaving weight [and structural integrity] from the steel cage around the driver's cockpit. As with De Nags above, less weight gives the driver an edge for acceleration. So, at the 1982 Brazilian Grand Prix [TMI!!] several of the FOCA team cars sported "water-cooled brakes" with substantial reservoirs of weighty fluid. These tanks were brim-full for the prior weigh-bridge but were designed is dribble out the fluid in early laps until the lighter cars could overtake their more powerful rivals. At the last pit stop before the end, the tanks could be brimmed up again for scrutiny.

It will surprise nobody that there was no specific clause in the list of regulations which prohibited this chicanery. But then there was no specific clause prohibiting turbo-charged engines which had been brought into the competition by The Big Boys of FISA. There was a row and Renault [FISA centraal] sued to have the two water-dribblers Nelson Piquet and Keke Rosberg who had passed out Alain Prost [Renault] disqualified so that their boy won the race and the accrued points towards the Annual championship. Renault did not object to dribblers who hadn't passed Prost, so they were allowed to keep their points. Two things a) Requiring intense scrutiny only where the injured party lost may remind you of the voter fraud cases only in AZ, GA, MI NV, PA, WI where the Democrats actually won the election. b) Keke Rosberg finished up winning the 1982 Championship despite his nul points for Brazil.

The row came to a head later that year when the lads from FOCA boycotted the San Marino Grand Prix. Which made that event a rather thin affair; with only 14 starters. It was therefore a stitch-up for local Team Ferrari, whose two drivers Villeneuve and Pironi were waaay ahead of the peleton and instructed to slow down to conserve fuel. The interpretation of those instructions led to a bitter internecine feud on the circuit and afterwards which finished just two weeks later when Gilles Villeneuve was killed on the track in Belgium. I said it was a dangerous sport!