Big event up coming in the firmament: apart from it being the Feast of St Thomas the Apostle: patron of India and skeptics. Not St Thomas Aquinas, the Aristotlean theologian: his day is on 28 January. Nor St Thomas à Becket [of Canterbury]: he's on 29th December. And, natch, apart from it being the Winter Solstice. Remember that, in just under half the years, Solstice doesn't fall on the 21st. Whaaaat's happenin'? The Great Conjunction is happening! Known among the red tops as the Christmas Star. Every 20 years or so the two biggest planets in our solar system line up with the Earth so that they appear really close together. They are closest at 18:37 GMT but close enough any evening between 19th and 23rd December this year. It's Winter in the N hemisphere, so weather is predictably crappy, so don't put all your money on the 21st. Indeed you should go out, with the kids, anytime from this evening to scope things out. The planets are super bright but close to the horizon and also close to the sun, in the SW sky shortly after sunset. The earlier the view the higher they'll be. Readers much younger than me will get another chance in 2080. 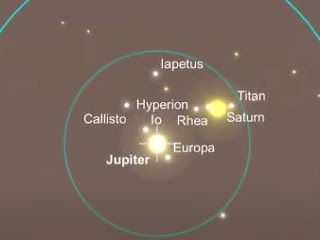 The field of view for a hobby telescope is the blue inner circle [Note the source] Jupiter ♃ and Saturn ♄ are here about 6' of arc apart, which is really really close. The moon is about 30' = ½° across. The distance between these two giant planets [U Exeter - good animations] will be 1/5th the diameter of the moon. They haven't seemdd so close since 1623. Whatever the details, people with crappy distance vision may see the event as a single point source of reflected light. Beg borrow steal binoculars . . . and be sure to sanitize in between geeks if you're sharing the view with unpodded people. Lidl has a special this month on spotting scopes and binoculars.
Posted by BobTheScientist at 07:22