On the shoulders of dolphins

About once a decade, a mother will ask me to advise their teenager about careers in science. I doesn't always turn out as Mam expected because my first and strongest advice is to take a gap year after school. Not a this will look good on my CV year designed by Mammy's life coach, but a real wind in my hair escape from home to try something different preferably in foreign because it's never too late to learn another language. Working in a bar in Madrid; or walking the Pacific Coast Trail; or waking σε μια ελληνική παραλία after too many beers; would all fit the bill. The other point to make is: don't over-think it - if you resolve to make your own luck you'll be successful from any one of a dozen starting points.

About 6 years ago, when I was still working at The Institute, we had a handful of Malaysian students arrive to complete their final year of college education in the Irish Midlands. That would seem very random until you factor in that one of our Suits had been on a Malaysian recruiting junket selling the virtues of the education to kids who could muster €10,000 for international fees. One of them elected elected to do a 4th year research project under my supervision - which meant something something molecular evolution using the tools of bioinformatics. And that is how I met Ilaina Khairulzaman:
Bob: Your appearance is a bit surprising, I've sort of run out of project titles. What are you interested in?
IK: I live near the beach, I like things that swim.
Bob: [Remembers a previous "done" project looking at the inventory of bovine immunity molecules] What about dolphins? They can swim. [my pal Des showed that dolphins are effectively streamlined cows].
IK: I lo♥e dolphins! 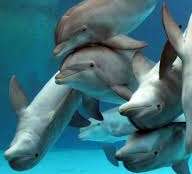 The genome of Tursiops truncatus bottlenose dolphin had been recently sequenced; I reckoned, as a minority species, it would be notably under-analysed, so there was surely a project in there, comparing the dolphin's immune repertoire with its nearest rellies. Accordingly, I threw her a manual of binfo techniques, and asked her to go and read what was known about cetacean immunology as the basis of the required literature review . . . Answer: Not very much.

It turned out to be a golden bit of research. Partly because dolphins and other cetaceans a very peculiar reduced instruction set innate immune system with genes for hardly any anti-microbial peptides [prev]. But also because Ilaina was dived in for a total immersion investigation of the peculiarities of dolphin immunology. Nobody had done that before. One of the peculiarities of The Institute is that, in order to graduate, the student must complete a 12 week work-placement, usually in some industrial setting. I arranged for her to spend the following summer working in my old lab . . . doing more of the same. But Ilaina made herself useful in that setting as well as continuing to push at the frontiers of science w.r.t. cetacean immunology. My old / her new boss found some money to keep her on the pay-roll  - and said that with a bit of spit and polish her research would make a very nice MSc thesis. And it was so.

There was a PhD in there too but Ilaina had other ideas. Soon after arriving in Dublin she started to hang out in the haunts of public understanding of science because, although she could do original research fine, she could do passion for science rather better and it was more . . . engaging. Since 2017 she has been working with a UK charity Sense About Science, which seeks to promote evidence-based policy and public engagement with science. They've had a very good year because they are part of the antidote to pernicious nonsense which is circulating about Coronarama. Ilaina is Head of international public engagement, training and marketing. Which is probably bigging her up a bit; but heck, why not? If I have retired to be CSO [Chief Sofa Officer] of the Fáinne-chloch Institiúid Smaointeoireachta Éabhlóideach, then Ilaina can be V.P. IPET&M. So long as nobody doubts her commitment to lighting a fire under the youngsters of Europe so that they park their aspirations to be currency traders or Insta Influencers and see that science is a worthy challenge for a thinking body and can be the most tremendous fun at the same time.