As I said before, Alfred Russell Wallace was a much travelled person. After a trip up the Amazon with Henry Bates, he went East and cruised about the spice islands collecting a staggering number of species new to science.  He has something like 500 species named wallacei or wallacii after him; as well as craters on the Moon and Mars  - but those are just hat-tips: he never got that far from London. Joe Public knows him because he lit a fire-cracker under Darwin's couch by sending The Ternate Letter to the great man which contained the core of the latter's own Big Idea. Darwin lay on his couch reading for about 50 years after his return from his own mind-opening voyage on HMS Beagle. There was a huge incoming correspondence from all over the world describing weird and wonderful aspects of the biological world; including of course the above-mentioned Ternate Letter from Wallace.

The Theory of Natural Selection proposed independently by these two men was the cohering conclusion to several strands of wildly different data:
Darwin was a little lax in documenting his specimens - all his Galapagos finches were labelled 'Galapagos' but the key insight was that each island in the archipelago had different species. Wallace OTOH became acutely aware of the of the geographical provenance of his burgeoning collection and he started to notice trends and patterns.  He has been called the father of biogeography because he really put that way of thinking on the map. 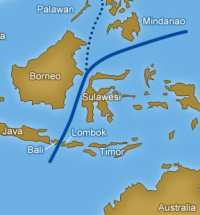 Actually, that's literally on the map, because as well as the hundreds of species named for him, he also 'owns' a chunk of the East Indies called Wallacea and the most famous, not obvious to all thinking people, boundary in biogeography  - the Wallace Line [R in a bold blue] which marks the end of Asia and the beginning of marsupial land.  It's not as black-and-white, on/off as the bold line implies and there's another Lydekker's Line which separates Australia and New Guinea from the smaller islands to the North and West. Wallacea is the tropical paradise between the two lines is the grey where the flora and fauna show both Asian and Australasian attributes.  Of course 'grey' is entirely the wrong word to describe the brilliance of life in the tropics.  Wallace's Line is quite unexpected - why is there such a shift in fauna between Bali and Lombok when the two are separated by only 35km of ocean? That becomes a lot clearer if you metaphorically drain the ocean to levels experienced during the ice-ages when the water was all piled up in mighty glaciers and at the poles. Even with the seas 120m below the current datum, there is still a deep wet cleft between those two islands marking the boundaries between the archaecontinents of Sunda [W] and Sahul [E].

Wallace was also remarkable for his longevity, dying at age 90 in 1913: a year an a half after Alfred Wegener published his iconoclast suggestion that the continents have been romping about the face of the globe crashing into each other and groaning apart. That's why you find marsupials in Australia and South America but not in Ukraine or Ireland. But everyone ignored Wegener until 50 years after Wallace was dead.
Posted by BobTheScientist at 08:30